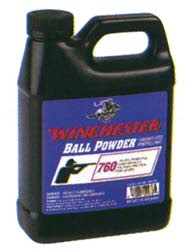 Eight pounds of happiness in a jug showed up at the front door today. I even have enough other components to make use of it. But, beyond that, it's starting to look like someone will have to come up with a smokeless matchlock rifle. Primer shortages suck.
Posted by MauserMedic at 6:52 PM 2 comments:

Stupid Is As Stupid Does 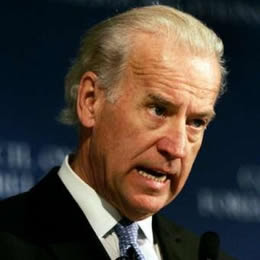 Even when he's right (riding in an enclosed space will put you at greater risk for infection than standing in an open field), he still comes off looking like an ass. Especially when his boss, The Smartest President Ever, is trying to convince everyone all is well (it's what's on the teleprompter, so it must be true).

Joe Biden, keeping America safe by guaranteeing no one will ever be willing to think of assassinating the president.....
Posted by MauserMedic at 4:08 PM No comments:

Just proving, if you're really bored, you can combine the odd magazine and barrel with your dog's moistend and formed rawhide treats to make your very own prototype.......
Posted by MauserMedic at 7:08 PM 3 comments:

Personal Life? People have that? 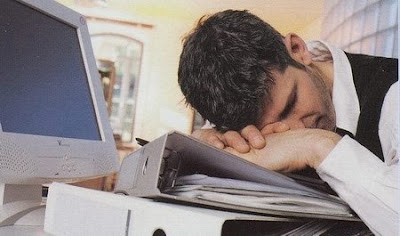 Yet another experimental rifle in an attempt to raise the hit performance of the infantry. Looks like something I might have made in metal shop back in highschool.
Posted by MauserMedic at 4:38 AM 2 comments:

An experimental rifle supposedly from a US project in the 1950s to develop a personal weapon with higher hit capability. Not particularly handy looking; I'd think getting around in confined spaces within buildings, alleys, etc.
Posted by MauserMedic at 7:41 AM 7 comments: 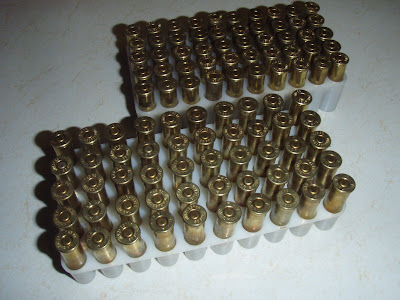 Finally allocated some time to load up some rounds. Years of being a brass rat are paying off, as I don't have to search for common cartridges that are anything but; I'll just make my own.

Since primers are scarce these days, this seems look a good season to concentrate on revolvers. I find that I tend to burn through rounds at a slower pace with them, probably because of the enforced breaks to reload. Additionally, I prefer to do most of my firing double-action. If I ever have to use a revolver for defence, I doubt my fine motor control will be delicate enough to safely use single action. I've had to remove a pistol under true stress from a holster once, and I've never forgotten my surprise at how difficult it was. It felt like trying to operate a pistol while wearing winter gloves. Thus, better to learn to work with a heavier trigger weight that reduces the chance of unintended discharge from reduced sensation/motor control.

Here at Schloss Hundsabber, we keep Smith and Wesson .357s as ready guns. Although the models are different, operation isn't. And until recently, ammunition was easily found. Fortunately, these are well suited for cast-bullet reloads, allowing low cost, control in recoil, and above all, availability.

So it's off to the garage casting bench, and a Lee six-cavity mold for the 158 grain lead round nose bullet; a long-standing classic that while not notable for being a reliable man stopper, is very well suited for familiarization with one's revolver. In this case, due to a personal desire to spend minimum time in bullet prep, I had purchased the tumble-lube version, resulting in a bullet with appearance of having been dipped cheap varnish. But at a minute or so in saved labor per round, over the course of what will probably be around 1,000 rounds this year, shiny and pretty can be overlooked. It may not be as pretty as store bought, but it's actually in my hands, and shoots fine: 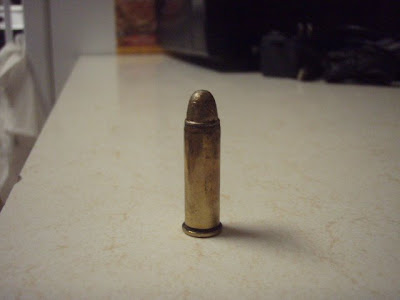 As a side note; even when sorting .38 from .357 brass well in advance of a loading session, I seem to always have one slip through: Guess if I'm feeling extra-stingy, I could cut it down to .38 length at least.

This particular run consists of mixed brass (not shooting bulls-eye type targets, so minimal groups aren't a priority), the previously mentioned 158 grain lead round nose bullet, CCI small pistol primers, and 4.3 grains of Winchester 231 pistol powder. Time permitting, I'll find my chronograph this week, and see what we get for velocity out of the three different barrel lengths we have here. If not, I'll just have to settle for shooting a pistol for the first time in nearly two years this weekend.

Posted by MauserMedic at 7:52 PM No comments:

The PSDR 3 is a fully suppressed .45 ACP Smith & Wesson Model 625 revolver developed in 1993 by Joe Peters, under contract from Northrhine-Westphalia, for Germany’s SEK (SWAT) teams.

This photo is from Visier Special 6, 1997 (special edition of one of the three big German gun journals)

This gun brought to you by a nation with an apparently compulsive need to over-engineer all things mechanical.

(note: I can't recall what site I found this at, so no credit to the original source is available).
Posted by MauserMedic at 9:52 AM 6 comments:

I look forward to living a in giant version of Lebanon twenty years from now, if things keep proceeding like this.
Posted by MauserMedic at 7:41 PM No comments: 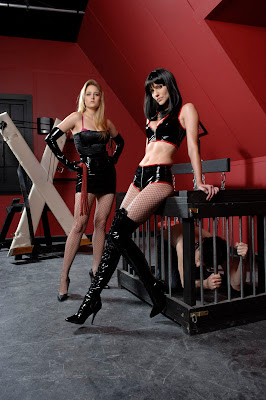 Once again, in the treatment room with a female patient and the doc, assisting with an injection for pain control.

Doc: "So you were here a few weeks ago?"

Ah, the joy of making one's self look like a perv.
Posted by MauserMedic at 7:00 PM No comments: 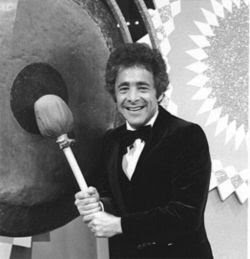 When an elderly patient is laying on the treatment table clearing her throat, and tells me "you know I have some phlegm in my throat", I probably should have engaged my brain before saying, "No, but if you could hum a few bars....."

At least my supervisor wasn't in the room.
Posted by MauserMedic at 7:29 PM 2 comments: