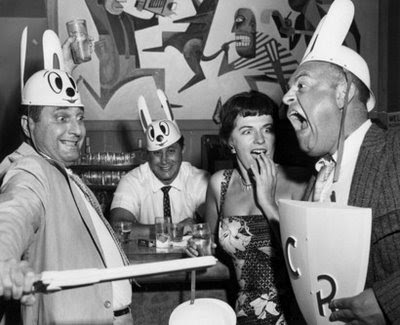 Posted by MauserMedic at 5:58 PM No comments: 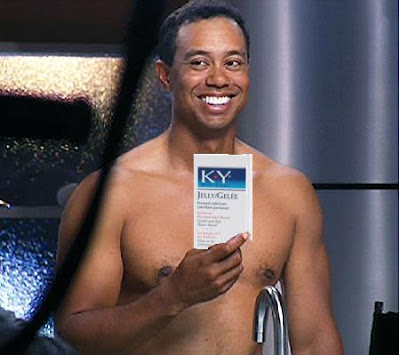 OK, everyone's sick of Tiger Woods stuff. I stayed away from it, mainly because a marital tussle between a hyper-rich "athlete" and his trophy wife means nothing to me. Now, I've just seen on the news AT&T dropped his sponsorship. Being the caring, compassionate individual I am, I've thought of a few potential replacements to help Tiger out.

K-Y Jelly: "Even Tiger Woods isn't so slippery he can't use a little help now and then."

Las Vegas Tourism Commission: "What happens in Vegas, stays in Vegas. As long as you manage your cell phone contacts, that is."

Enterprise Car Rental: "Pick Enterprise. We’ll pick you up. If your wife has put the golf club down."


Now, who else can use my expert marketing skills?
Posted by MauserMedic at 8:12 AM 2 comments: 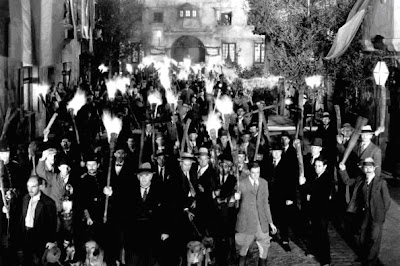 After being advised approximately two weeks ago of being called up, I've learned that I'll be backfilling a slot in another company within my battalion. Specifically, an ambulance company. No word yet on exactly what type of missions we'll be covering, but I don't think it will be particularly peaceful, given the way things are building up for Afghanistan. The major pain in the ass currently is the new drill schedule has a large number of extra days on it, in addition to a 21-day annual training that is still unsettled as to exact dates. As long as this overall deployment has been planned, and deployments have been occurring, one would think things would be more organized, but since our unit is playing catch-up to the originally notified units, things are......interesting. One thing I know for sure at the moment. I am Very Much Not Popular with the coworkers whose summer vacation plans are now at the mercy of the National Guard; lucky for me federal law forbids tarring and feathering by mobs. Can't say I blame them though. I'd be pissed if I were on the other side too.
Posted by MauserMedic at 8:06 PM 5 comments: 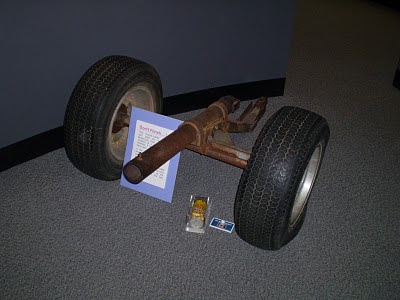 Somehow, I see this being towed behind somebody's ATV........ I hope everyone has a peaceful and fulfilling Christmas!
Posted by MauserMedic at 3:59 PM No comments:

Uncle Sam has seen fit to give me the Christmas gift of another all-expense paid trip.

Now then, where'd I put those plans for a still?
Posted by MauserMedic at 8:38 PM 3 comments: 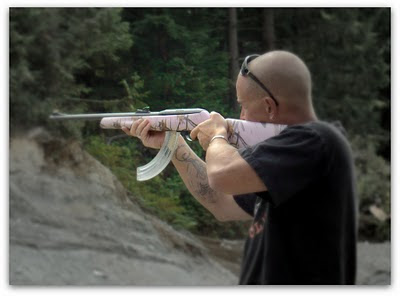 I haven't seen a pink gun I like yet. The camo pattern on this one doesn't help in that regard. And, I really, really hope that somewhere out of the image frame, there's a little girl watching her dad trying out her rifle.
Posted by MauserMedic at 6:57 PM 4 comments:

You Shouldn't Be Surprised

I've noticed, since (former) Major N. Hassan went on his spree, that many people are under the impression that military bases are armed camps. Nothing could be further from the truth. In fact, military bases are highly regulated in weapons possession; it only takes one incident to ruin some officer's career, so like so many other things in the military, the easy route is to institute so many restrictive rules for possession that it's more of a pain in the ass to comply than to do without for the average person. An excellent example of this is found here, at an Army post of all places. Perhaps they hired little Chuckie Bloomer to do this poster also? Fifteen years ago, I saw a whole display produced by Handgun Control, Inc. at an Air Force base in South Dakota in a hospital entrance. There's a lot of individual soldiers who enjoy and support private arms ownership. Just remember there's also a lot of brass that view the military as a corporation with matching suits, expensive toys, and a large number of drones who should shut up and do as their told.
Posted by MauserMedic at 10:12 PM 3 comments: 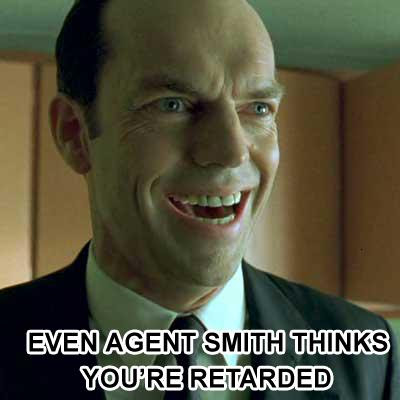 until you told me the reason your transplant failed was that you "forgot to take my medicine" because you "felt so good". Yes, it's amazing how much better one feels when your internal organs actually work. Even if it's an organ someone else gave up for you. That you couldn't be bothered to maintain.

Congratulations, you've pissed away at least six figures worth of work and sacrifice by a large number of people dedicated to improving the quality of your life. Good luck finding another donor.
Posted by MauserMedic at 8:23 PM No comments: 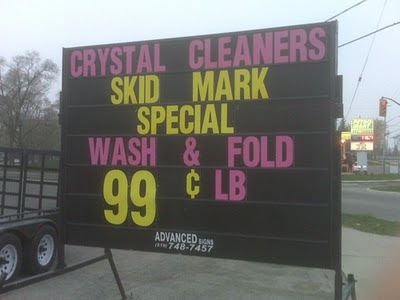 Dear Lord,
Please do me the favor of taking me out before I become that old guy that leaves a butt-track everywhere he sits in the hospital.........
Posted by MauserMedic at 8:15 PM No comments: 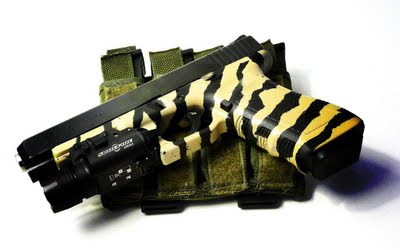 Tiger striped. Gotta be honest, I would have never thought of this one on my own. Thankfully. 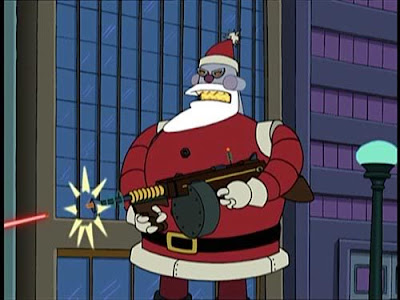 This past weekend was the unit's drill weekend "holiday meal" (formerly Christmas meal; oy, how low we've fallen as a culture) and briefings. Our's wasn't bad; good food, relatively short briefings, etc. Things could've been worse; we could have been in the company of our battalion that got notified at the holiday meal that they'd just won an all-expense paid trip to Afghanistan. Nothing like a little forethought and consideration to make everyone happy, right? I'm sure there's going to be a load of Christmas celebrations this year that will feature more tears than smiles. And they're not even leaving until well (really well) into 2010.
The brass has been making these announcements for almost 10 years now; is it too hard to figure out that maybe right before one of the major family holidays isn't the time to do it?
Posted by MauserMedic at 7:59 AM 1 comment: 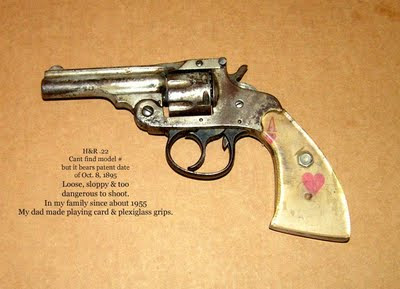 "Loose, sloppy, and too dangerous to shoot". With a description like that, I guess the only reason to buy it is the aesthetic appeal.............Truly, how can one pass up a revolver with plexiglass grips secured by a hardware store hexnut?
Posted by MauserMedic at 7:52 PM No comments:

One of the interns at the hospital recently had an early-morning home invasion. 5 AM on Black Friday, and someone came in through the back door uninvited. As he and his wife happened to be up, getting ready for shopping, the intruder was noticed, and ran as soon as he realized he had someone running down the stairs at him. He got away, and we now have a group of very nervous doctor's wives.

These walk-in attempted burglaries have become rather frequent in my town lately. We also have a large number of unemployed urban youth imported here from Illinois in the last year, which is a major change in our demographics. According to friends who circulate in law enforcement circles, a good number of them already have convictions and outstanding warrants, but Illinois won't spend the money to put them back in their system. Their our problem now. Just a coincidence, I'm sure.

So far, no one has been hurt; just missing cash, purses, and snatch-and-grab items. But what has been the response by the doc's wives to up security? New locks, and.....curtains. Apparently, if they can't see you, they won't bother you, is the current thinking. I'm thinking locks are good, as long as they don't want in very badly. It's a good start; but curtains? Curtains are good for making sure no one can see what's happening to you if something does happen, not for keeping burglars (or worse) away.

At least one of my docs has the right idea. A police-style shotgun is now on the shopping list, along with some buckshot practice to follow, which is more my idea of an appropriate dissuasion technique. At least there's one family around here that won't have to rely on wishful thinking for protection.
Posted by MauserMedic at 8:23 PM 4 comments: