That Was Worth It 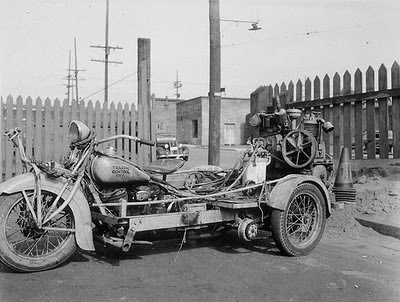 Damn near 600 miles on my bike round trip in the last two days to attend mandatory briefings (haven't changed any since the last two deployments) and a thirty minute "go get'em guys" set of speeches in the opposite corner of the state. Oi. Thankfully, I'm back at the rally, posting courtesy of a mobile wireless relay, and drinking Bud at an alarming rate for the sole purpose of seeing how much I can still put away and remain upright. Tomorrow (today, technically) the rally truly commences. Weather is supposed to be exception, so I'm hoping for a serious display of mammalian lactation units this year, in addition to the normal debauchery. Insha'allah, there will be some serious hardbody displays tomorrow........
Posted by MauserMedic at 11:53 PM 2 comments: 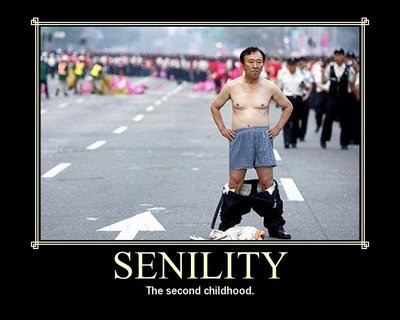 Got up at the Freedom Rally campsite yesterday, rode home, packed gear for a one-day mandatory deployment ceremony, then got back on the bike and rode to the opposite corner of the state where the armory is so I could be ready in plenty of time this morning. Today, pull the uniform out of the ruck, and........everything but the military t-shirt. As luck would have it, I have one t-shirt packed in the same color. And as long as we don't deblouse, no one will see my endorsement of the Hawgstock Shower Stage.
Posted by MauserMedic at 7:10 AM No comments: 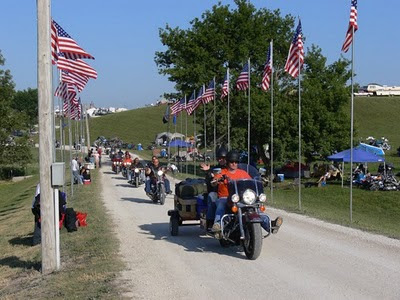 The official start of the Freedom Rally in Algona is July 1st, which means the park will be filled to near capacity by then. So, the bike is packed with enough crap to look like an a sporting goods/army surplus shop on wheels, and I'm leaving to stake out my space.

Unfortunately, tomorrow I have to drive 3/4 of the way across the state to take part in a mandatory Yellow Ribbon ceremony with the unit that dumped me into my current unit for deployment. Which I wouldn't have a problem with, had they not managed to lose track of all the mandatory tasks I did during months of extra weekends with them, which I ended up having to do all over again during Annual Training. Not Happy With Them. When that wraps up Wednesday evening, I won't be looking back as I leave, but I will be thinking happy thoughts of the upcoming weekend.

And hoping that with a little luck, this year won't be like the last, where middle-aged cellulite was on prominent display everywhere. I still haven't gotten some of those scenes out of my head yet........
Posted by MauserMedic at 1:56 PM No comments: 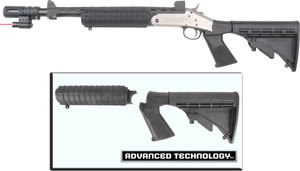 I'm willing to bet the the engineers of the NEF Handi-Rifle never envisioned something like this........
Posted by MauserMedic at 4:15 PM 3 comments:

The Glory of Being A Medic 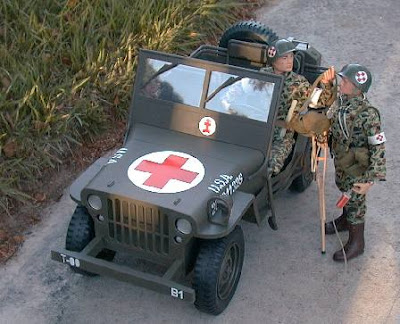 Of course, we all know being a medic is undoubtedly one of the most glamorous military specialties, outside of being infantry, a surgeon, or working for JAG. What with all the life saving, courage in the face of imminent death, and selfless service. Oh, and what we usually do......... 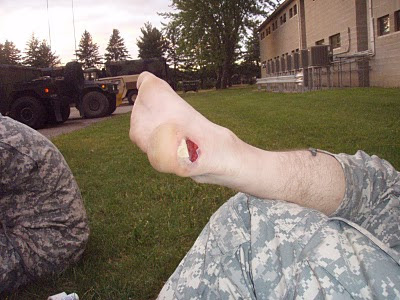 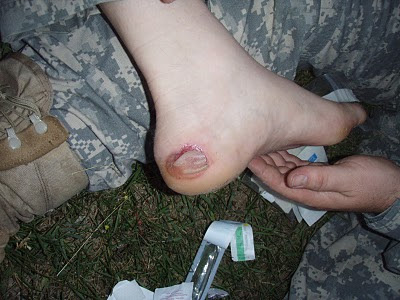 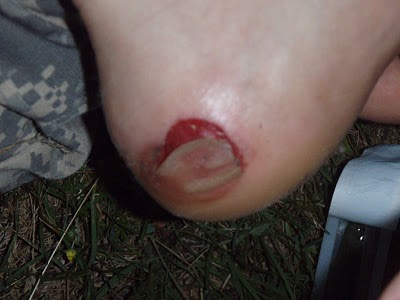 The two smallest of four blisters I treated that day. The others were one two inches across filled with blood and the second extended from the ball of the foot to the heel across the width of the foot. Both of these soldiers finished their road march before seeking treatment, one of whom had blood soaking through his boot by the end. Some serious stamina for being "weekend warriors", a term that I gladly note has been fading rapidly in my neck of the woods.

And in all seriousness, I'm personally acquainted with several people who've provided care under fire. It's not glamorous, but they're some of the finest soldiers I know, and we're damn fortunate to have people of their caliber.
Posted by MauserMedic at 6:14 PM 2 comments: 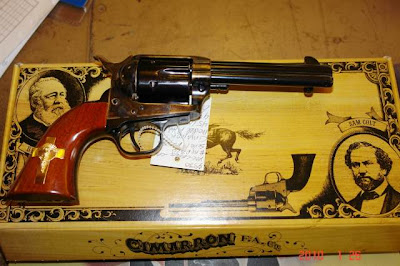 The pistol in general is a reasonably attractive piece; but a crucified Savior on the grips? Not so appropriate.
Posted by MauserMedic at 5:21 PM 3 comments:

The Joys of Teamwork 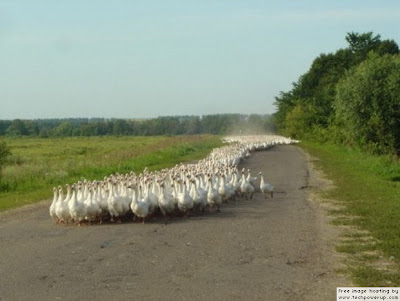 Tomorrow morning, bright and early, there will be a Brigade Run. Several Battalions of soldiers will fall into a giant formation in PT uniforms, with the Brigade Commander in the lead, and take off in a mass formation designed to awe the bystander, impress the individual soldier with the extent of personnel, and cement our units together as a team prior to deploying.

What will really happen is a large number of people will be in the two-legged equivalent of a vast traffic jam, with those in front moving at a slow pace to minimize outrunning those in back, while those in back alternate between a shin-burning slow yet uniform shuffle, then a less-than-uniform sprint to catch up as the accordion effect kicks in. This will be followed by a descent en masse upon the space-limited chow halls by sweaty soldiers in a hurry to eat, shower, draw weapons, and get to their assigned task of the day in less time than is realistically achievable, followed by irate officers and NCOs trying not to blow an artery while watching the training schedule go up in flames.

It should be a lovely start to the day.
Posted by MauserMedic at 7:50 PM 2 comments: 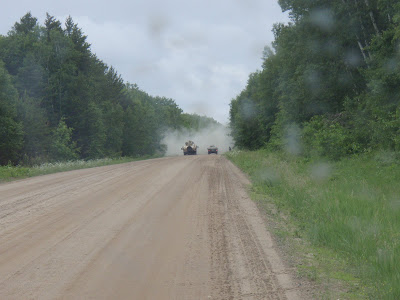 Today's activity was providing medical support for training troops. Which consisted of reacting to IED attacks and ambushes. As seen above, the simulators have become more realistic overtime, which increases risk. Part of the training process is wearing full body armor, eye protection, and keeping all windows in the vehicles closed, regardless of temperature (although apparently the armored Humvees have air conditioning. My Desert Storm era Humvee-based ambulance, the windows are the air conditioning). 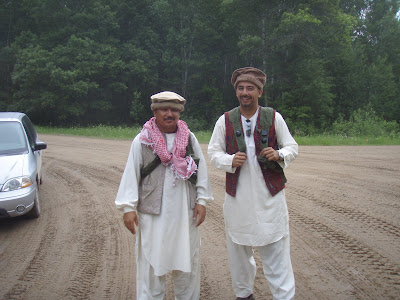 We are fortunate to have local members of the population who are from Afghanistan acting as villagers and interpreters helping us train. OPFOR (opposing forces) are strictly military personnel however, due to weapons handling requirements. This is extremely useful training, as it's far better to learn from mistakes here. The professionalism and intensity of the young soldiers is really showing through on these trips; no one is taking this deployment lightly.
Posted by MauserMedic at 6:06 PM 2 comments: 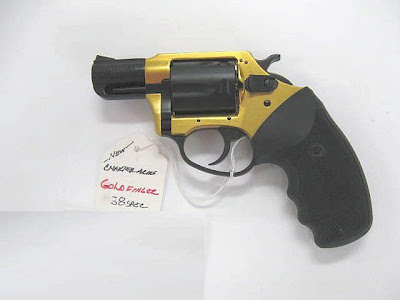 The Charter Arms "Goldfinger" 5-shot revolver. Either Charter Arms has decided to focus on the Iowa Hawkeye segment of the concealed carry market, or this is a foray into the combination tactical/pimp gun niche.
Posted by MauserMedic at 5:49 PM 3 comments: 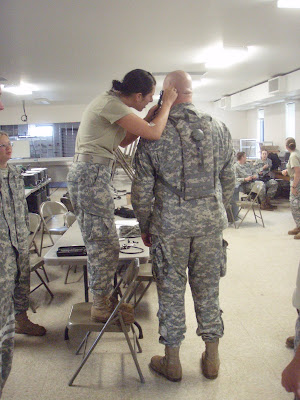 Another day of fine weather, with intermittent rain that generally fell about the time any training took place outside. Fortunately, the first four hours of duty was a briefing on Afghan culture. The presenter has spent considerable time there, as well as several other primarily Muslim countries, and put out far more useful information than I've come to expect from such briefings.

The second half of training consisted of medical training, starting off with the 100 meter dash and stick event, where the treating medic ran to the patient, then proceeded to place a 16-gauge needle in whatever vein presented on the designated victim patient. I was reminded that being on the receiving end of a fishing expedition for a vein is extremely unpleasant during that.

Following that, a refresher course on HEENT assessments, complete with a good up-close look into several orifices. As you can see above, this can be a little challenging for some.

Tomorrow, a foray into the tick-infested (literally) woods to begin battle drills. As we're told that around 70% of deer ticks in the region test positive for Lyme's, this should provide an interesting experience in attention to both training and critters.
Posted by MauserMedic at 6:31 PM 1 comment: 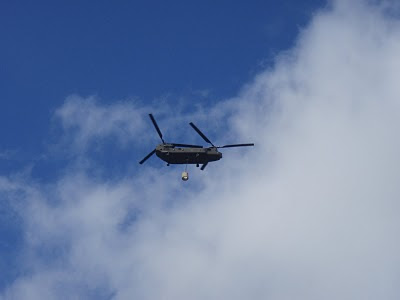 Some things in the Army seem to stay constant across decades, like the Chinook seen above that was training as we entered post for Annual Training. Most things don't.

This first week is bringing home how much things have changes since Afghanistan started. When I first got in the Guard, a medic from the Viet Nam era wouldn't have had much trouble recognizing a lot of the equipment I trained with. We carried M16A1 rifles and 1911A1 pistols. The bandages, pt monitoring equipment, and vehicles hadn't changed much either.

In 2003, when I first went to Iraq, that was the equipment we largely took, although the HMMWV (Humvee) troop and ambulances had been introduced, along with a newer version of the 2.5 and 5-ton trucks (good-bye beloved stickshifts and hated dual rear tires, hello dummied-down automatic transmissions and inflatable while rolling tires. By the time we left in '04, tourniquets were no longer taboo, clotting materials were entering the theater, and Strykers were rolling around the base rather than 113s and Bradleys.

It's changed even more since then. M4 rifles with optical sights, which MUST be slung on the front of the body. Mandatory mounts on helmets (ACH, to the young; call it a helmet and half of them don't know what you're talking about) for night vision devices. GPS systems in company vehicles allowing real-time tracking by the company of individual vehicles as basic as ambulances and simple four-person HMMWVs.

From what the younger medics are telling me, the basic medical doctrine and equipment have also evolved. I'm learning more from them than I can teach them when it comes to direct care in a field environment.

There's going to be a hell of a learning curve coming up.
Posted by MauserMedic at 7:11 PM No comments: 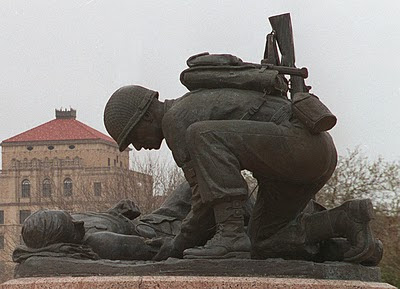 is upon me once again.

Suffice to say, the food changes very little, but the soldiers look younger than ever.
Posted by MauserMedic at 7:28 PM 1 comment:

I'm confident Helen will in turn demand that all individuals of Middle Eastern extraction residing in the United States "go home" in her next video. And all the white oppressors. And the black people. And all Mexicans/Central Americans with any Spanish ancestry. Because she's fair that way.

This is what happens when you allow the undead to hold jobs when they come back. Even if they're not dropping random body parts or biting people, the brain is still rotten.

It was pointed out to me that Helen Thomas is not a member of the undead legions; she was simply stating views learned in her youth, which was apparently 17th century England.

H/t to Ace of Spades
Posted by MauserMedic at 3:40 PM No comments: