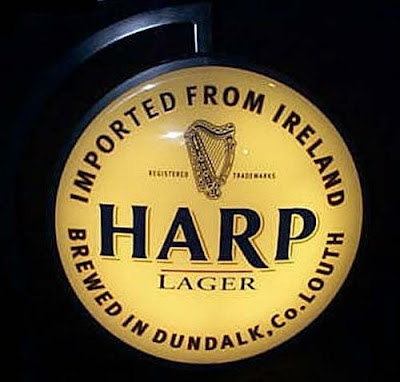 Harp Irish lager for $6.79 for a six pack at the local grocery tonight. Smooth alcoholic goodness, taking me back to college in Iowa City, where there was a small Irish pub a mere six blocks from my abode. Serving Irish and English brews, a long, dark hardwood bar almost the length of the bar, and (horrors! the liability risk!) a genuine dartboard with no electronics where score was kept on a chalkboard, and you brought your own darts or didn't play.
Posted by MauserMedic at 8:45 PM No comments:

How better to start the day than walking through the door to the vascular lab, having a greenish pregnant co-worker run up to you, and beg you to gear up so she can go hurl?
Posted by MauserMedic at 8:01 PM No comments: 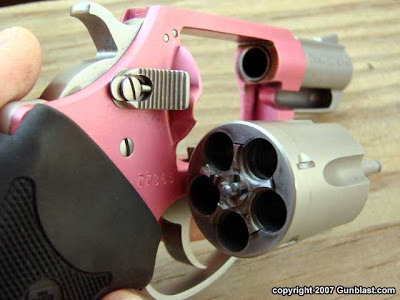 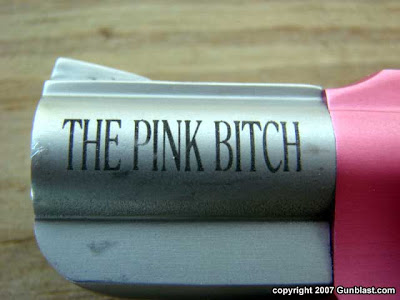 Hat tip to View From The Porch for this one. This one gets noticed not just for the inherently horrible choice of pink, but for the poorly thought out barrel. If that abomination of taste is ever used defensively, good luck explaining to the jury why you felt the need to have that engraved on the barrel. Maybe for your next gun, you could get something with a longer barrel. One that "Judge, Jury, & Executioner" could fit on.
Posted by MauserMedic at 10:05 AM 1 comment:

Having A Badge Doesn't Mean You're A Peace Officer 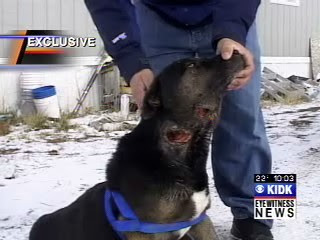 See why over at Xavier's.

And by the by, the deputy in question is, in my opinion, a shit-stain upon the honor of decent peace officers. And I say that as someone who held a reserve badge and put down a fair number of critters while wearing it.
Posted by MauserMedic at 8:24 PM 2 comments: 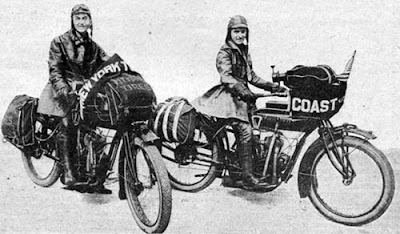 As in, I've started wearing my bifocals today. This is definitely going to take time to get used to. I'm planning on getting out to the range this weekend also, so that should be interesting. Given that I've been taught that the front sight should be the object in sharp focus, I expect it shouldn't be a problem, and possibly better as my prescription had changed a bit.
Other than that, in a few hours I'll be riding The Wife's bike back from the shop for winter storage at home. If I'm lucky, the temperature will be in the low forties for the ride. Cagers get some interesting expressions on their faces when a bike goes flying past them in November around here. Fortunately I have enough leather to outfit a German S&M club, so I should be able to keep the cold out.
Posted by MauserMedic at 8:58 AM No comments:

Laws Are For The Little People 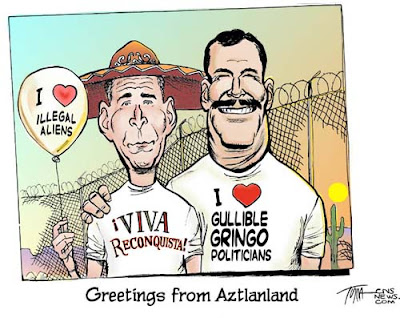 A proposal to prohibit local law enforcement officials from conducting raids on illegal immigrants in Des Moines was presented to at least one City Council member recently.Councilwoman Christine Hensley said Sunday that she spoke about six weeks ago with representatives of two immigration-rights groups that presented a plan that would block local city departments - including the police - from conducting raids on immigrants or inquiring about a person's immigration status.
Aspects of the proposal, brought up Sunday at an immigration forum, are similar to a national trend of "sanctuary cities.""They're looking at ordinances that have been passed in other parts of the country that would address that ," Hensley said. "It's really important to emphasize it's in the very, very beginning stages of discussion."Hensley said the impetus for the ordinance is illegal immigrants who fear raids and do not come to work, incurring costs on their employers.
"What I suggested to them is there has to be a lot of discussion about it and whether or not there's really a problem," she said.Details on the plan and its chances of becoming an ordinance are unknown.Alex Orozco, executive director of the Iowa-based Network Against Human Trafficking who is one of the people who met with Hensley, said Sunday he is trying to set up a meeting with Des Moines Mayor Frank Cownie before the end of the year.Orozco would not name the other immigration-rights group involved in the proposal.
Orozco declined to elaborate on specifics of the proposal except to say that "the ordinance would make it harder to conduct raids" and "all the city departments would be involved."Hensley said she didn't have more details about the plan.Councilmen Tom Vlassis, Bob Mahaffey and Michael Kiernan each said they had not heard of the plan.Cownie, Councilmen Brian Meyer and Chris Coleman could not be reached for comment.Orozco said media coverage of the plan while it is still in the preliminary stages would hurt its chances of passage. "We don't want anybody with hard feelings about this issue to get mad when we haven't even finalized it," he said.
Orozco had made a reference to the proposal earlier Sunday at an immigration forum at Plymouth Congregational Church in Des Moines.Even without all the details, some aspects of the proposal appear to mimic a nationwide trend: so-called "sanctuary cities" that direct local police not to look for violations of immigration law.The term "sanctuary city" has come under scrutiny, said Tim Counts, a spokesman for Immigration and Customs Enforcement, adding that there is no legal definition.
Counts said that as far as he knew, any city ordinance would not interfere with federal agents conducting raids.Nearly 70 cities, counties, and states have enacted sanctuary policies, according to a preliminary count by the National Immigration Law Center, but the Congressional Research Service in 2006 put the number at 32 cities and counties, according to a Sept. 25 article in the Christian Science Monitor.A major raid in Iowa came last Dec. 12 when immigration agents swept through Swift & Co. meatpacking plants in Marshalltown and five other cities nationwide, arresting about 1,200 workers - one-tenth of Swift's work force - on immigration or identity-theft charges.
The raids prompted a September federal civil-rights lawsuit filed in Texas against both the U.S. Department of Homeland Security and Immigration and Customs Enforcement by some of the workers detained.In August 2000, Des Moines police detained 49 illegal immigrants in a raid on a south-side bar that they said was the result of a six-week police investigation of drugs allegedly being sold at the establishment.

Lovely. An alliance of open-borders leftists and bottom-line business men urging that the city cease enforcing the law for the reasons of:

A: "It's wrong to discriminate against someone because they're not a citizen"
B: "Hey, you're screwing with my cheap labor"

What really pisses me off here is that the municipal government, responsible for enforcing the laws, is being asked to simply disregard it. I guess that's what happens when you know the general population will be extremely pissed, and there's not a chance in hell you're going to get the law changed through the legislature.

In the same vein of disregarding the law, I hereby suggest the asshats pushing this be deported ASAP after being stripped of their citizenship without due process. I mean, it's just some unimportant little laws.
Posted by MauserMedic at 7:38 PM No comments:

What A Fine Day 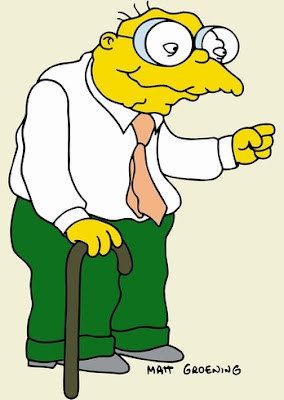 Achieving a horrible benchmark in my life, today I put in the order for my first pair of bifocals. On the suckitude meter, this ranks way up there. Adding to this, I had to get into my footlocker of old Iraq crap to find my heavy-duty knee brace after nearly getting dropped to the floor walking through my kitchen. There's nothing like the completely unexpected sensation of someone trying to remove your kneecap with a prybar to get your attention. Given past experience, this means two to four weeks of random intense pain until something settles back into the correct alignment. Who would've thought wandering through a frozen snow-covered marsh / compass course getting ready for a desert deployment might result in an injury? What are the odds?

Getting old sucks balls.
Posted by MauserMedic at 6:34 PM No comments: I got a phone call from my unit today. The order the supply sergeant put into the system for my issue of uniforms disappeared. Years ago this would have pissed me off, but now I'd be surprised if something hadn't gotten screwed up. One of the things about the military is that it's consistent in it's operations.

Another drill weekend as the only person in BDUs.

To (Not So) Old Comrades On Veterans Day 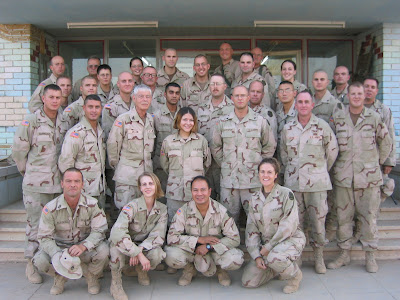 Posted by MauserMedic at 10:02 AM No comments: 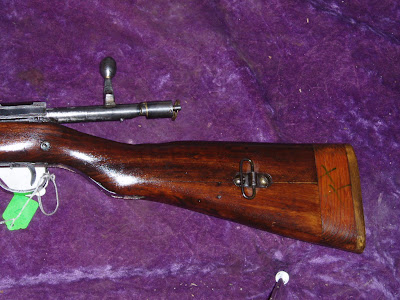 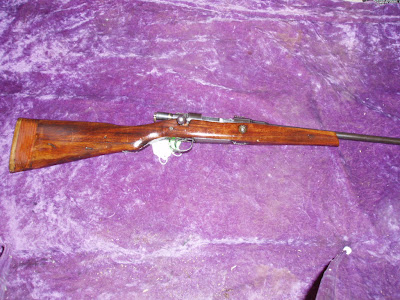 Another example of the post-WWII "sporterizing" era. The rifle is a late-war Arisaka, from looking at the buttstock. While the standard Arisaka did have the two-piece buttstock, the late war "last ditch" models also had wooden buttplates to conserve metal, along with other cost cutting measures. Several of which dangerously reduced the safety margin of what was originally an exceptionally strong action. What we have here is the Japanese equivalent of a low-number Springfield '03 that's been turned into someone's deer rifle. Hopefully this is one old rifle that stays in a closet and never gets shot again.
Posted by MauserMedic at 9:51 AM 1 comment:

The Clock Is Ticking 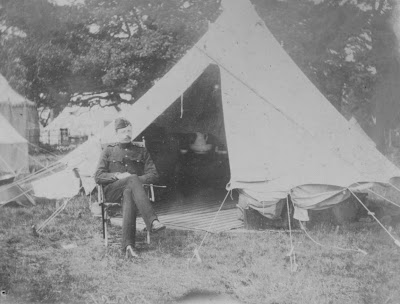 Seven more weeks, and the uniform goes on full-time again. In the meantime, spend as much time with The Wife as possible. Way back in basic training, seven weeks was an eternity. Now, it seems like tomorrow.
Posted by MauserMedic at 8:36 PM No comments:

I'll Pretend I Didn't Hear That 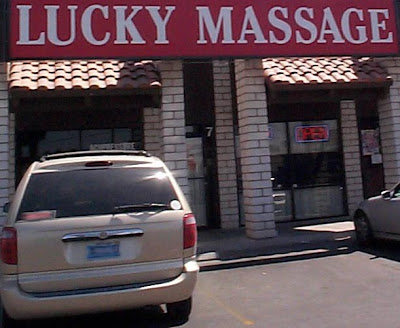 At the end of a procedure today, I had to help gently restrain a patient who'd been given concious sedation. He'd come out of it enough to be awake and move, but not realize he was on a table less than two feet wide. After two attempts to roll onto his back, which he would have been, just three feet lower than where he started, I reached across his pelvis to grab the opposite edge of the table. To help keep him in a safe postion, I also had my arm pressing over his lower abdomen, since most patients will stop trying to move with a little reminder. But not today. Today, I hear: "Mmmmmmmm. That feels good......".

NOT what I want to hear from a sixty year old man.
Posted by MauserMedic at 6:57 PM No comments: 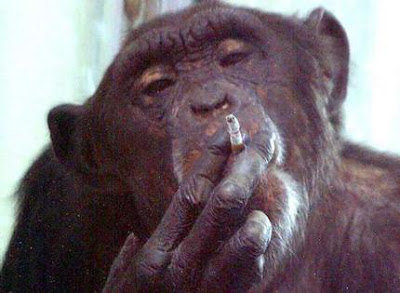 just not any for someone dumb enough to annually shut down circulation in a limb because you won't quit smoking.

No, I won't rant about people who do smoke. One, I like cigars; two, I think it's generally the individual's own business what they do with their body.

IF you've had portions of your arteries replaced because of abdominal aneurysm from chain smoking since your teens, and decide to keep chain smoking once your healed up;

AND you clot off the graft soon afterwards, requiring lysis and angioplasty to save your limb, then keep chain smoking;

AND you have to have your graft surgically revised when you clot it off again, then keep chain smoking after you're out of the hospital;

You're wasting my time.
Posted by MauserMedic at 4:48 PM 1 comment:

comes early this weekend, courtesy of the National Guard. In other words, computer access will be limited.

Keeping with the gold theme, this week we have the National Socialist Pimp Luger. How better to show your favorite white supremacist buddies your exceptional aesthetic taste than by displaying an uber-masculine death's head emblazoned Luger? Sure it's pricey, but doesn't your inner Sturmbahnfuhrer deserve the best?
. 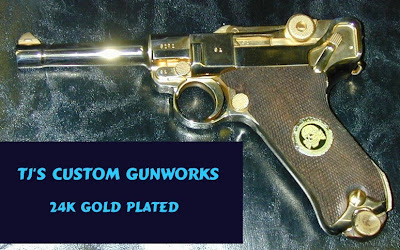 Posted by MauserMedic at 3:14 PM 5 comments:

The Pictorial Definition of Irony 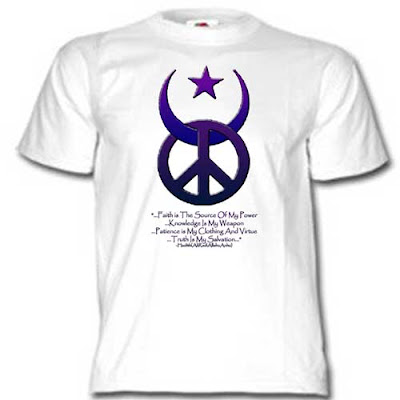 Posted by MauserMedic at 3:01 PM No comments: