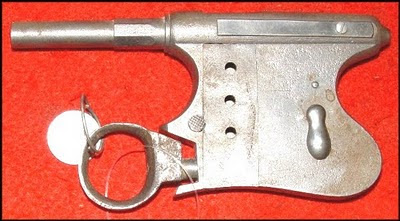 An early pocket pistol..........which apparently was designed by a team of pipefitters and locksmiths. 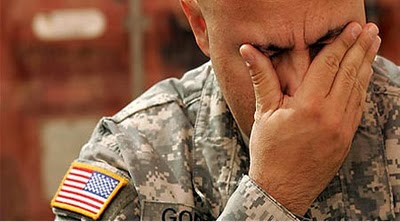 Starting the second of three weekends in a row of drill weekends, with this one running Thursday through Sunday. On top of the multiple call-back weekend for work before the drills, and the weekend of being on-call after the drill weekends are over. Given that I have been given the designation of "shit-magnet" by my coworkers for my unparalleled ability to draw long, complicated cases and unpleasant patients almost every weekend on call for the last six months, I'm guessing I'll be at work for the that last weekend also. AKA, six weeks of work with no days off. I had more free time in Iraq in 2003 than I've had in the Midwest since getting home from deployment #2. And if it weren't for having to be away from The Wife, I'd actually be grateful to be going on deployment #3 at this point. Makes me wish we'd bring back the tradition of camp followers.

On an up note, the local hotel I stay at for drill is down the street from a Goodwill store. Which has a fair number of used book racks. Based on past experience, and input from those who've already been to Afghanistan, Internet access can be spotty, especially if you're attached to infantry, who don't spend much time doing the REMF thing. But mail rates for bound material are cheap, and I used to read for actual entertainment or personal interest back when I had personal time. So, it's time to start stocking up on books for $3.88 (hardback) and $0.50 (paperback) for the time when I settled in somewhere, and The Wife can ship a box over for diversion. Two good finds this time around; a large, good-condition hardback of Rand's Atlas Shrugged and a decent paperback copy of Asimov's Prelude to Foundation. Never gotten around to reading the first, and read the other over twenty years ago. A brief perusal of Prelude serves to remind me why I enjoyed it back then; it actually requires attention and thought to follow the story line. Looking at what passes for entertainment currently, I'd wager there's a larger segment of the population that would find this frustrating or uninteresting. Perhaps I'm wrong, but looking out at Facebook and Twitter, I rather doubt it.
Posted by MauserMedic at 7:55 PM 1 comment:

OK, I recognize the M-16 magazine. And possibly a very old-style M-a6 flash hider. But the rest of it?
Posted by MauserMedic at 3:26 PM 3 comments: 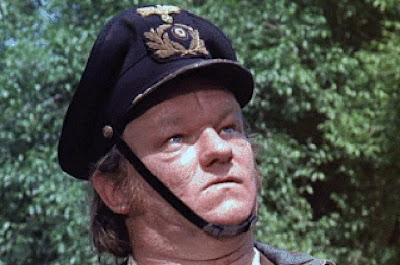 Submitted my application papers for a veterans riding association (not an M/C; no territory claimed, thus avoiding the problems of disputes with people who probably have prison records and don't care if they add to them. The members of the group I've applied to generally only killed people under orders from the government, which at least makes it legal). Now I can look forward to riding with some new folks for the almost 6 weeks of riding season I'll have before leaving again. Bah. I'm going to ride the hell out of my bike when 2012 riding season arrives....
Posted by MauserMedic at 8:12 PM No comments:

Too Dumb To Live 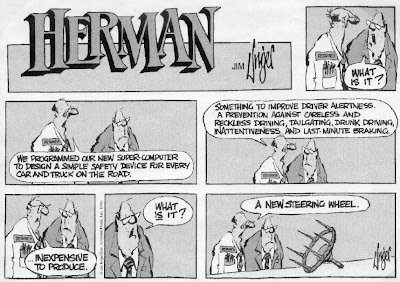 If you're on an interstate highway, there's three inches of slush on the road with snow falling constantly, actual traffic flow speed is 30-40 mph, and there's vehicles in the ditch every few miles, what makes you think your two-wheel drive, 4-cylinder, crapmobile is suited to driving in a manner better suited to Daytona? Drafting someone's rear bumper in normal conditions on the interstate is a bad idea, you dumbshit. And that gives rise to why I will always own vehicles with 4-wheel drive, 8-cylinder internal combustion engines, and some serious weight: many, many people with vehicles are mouthbreathing 'tards who have no concept of danger; high clearance, big tires, and willingness to carry a shovel in a vehicle gives you a better chance of getting out of trouble once you're there; and if it's a matter of you vs me in a collision, then it sucks to be you. Which reminds me, I need to start shopping for some welded tubular steel bumpers, since The Wife thinks it's probably illegal to weld steel punji stakes to the truck's frame.
Posted by MauserMedic at 8:19 PM 1 comment: 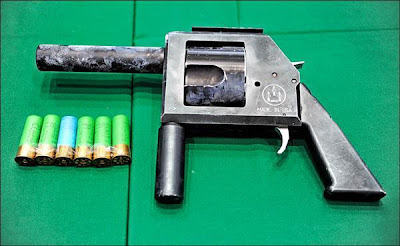 Shamelessly stolen from VFTP (hey, all my Sunday gun posts are derivative; might as well swipe from the best on the net). Sooner or later, Beretta will be made aware of this, resulting in three things: a cease-and-desist letter to an underground Chinese gunsmith; a far better quality fake logo on future copies of this gun derived from said order's letter head use as a reference by the Chinese 'smith; and a new project for a Beretta engineering team ("take this and make more, only with a nicer finish").
Posted by MauserMedic at 12:49 PM 1 comment:

Are We Having Fun Yet? 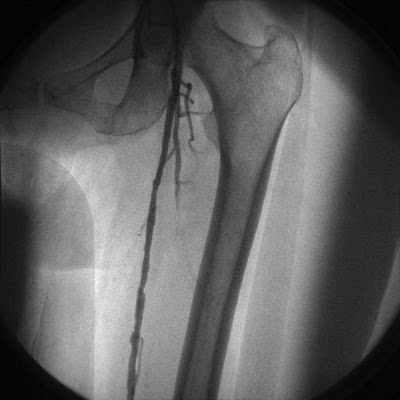 From 0700 until about 1900 hrs today, I mucked about (as the radiologist's minion) inside someone's femoral bypass graft in an attempt to clean out the jelly that used to be blood inside it, so the patient could keep the leg. Do I know how to party or what?

Between cardiac defibrillator placements and nasty vascular anatomy interventions, I'm starting to think the active-duty training before deploying to Afghanistan is practically going to be a vacation.

Posted by MauserMedic at 8:23 PM 2 comments: 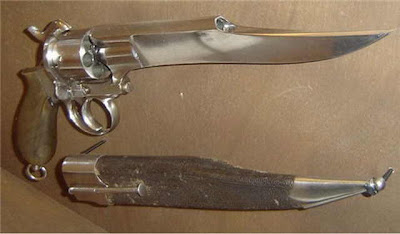 Now, I would pay to see how the 'smith managed to forge up the blade to barrel. Perhaps Firehand would know. But even in a blackpowder pistol era, I'd still think one would be better off just going with a regular pistol in one hand and a Bowie knife in the other.
Posted by MauserMedic at 5:17 PM 9 comments: 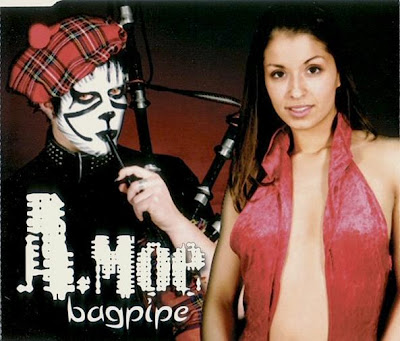 Found at Ace's, this is probably the perfect storm of bad singing, bad make-up, bad dancing, and bad storytelling.

Posted by MauserMedic at 5:41 PM 3 comments: 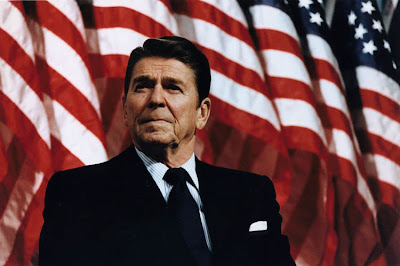 Back then, as a teenager, I thought there wasn't much difference between politicians. I've been regretting we haven't had anyone close to his beliefs and skills ever since he left office. Then again, we did have a far-left, ineffectual, appeaser in office immediately preceding him........
Posted by MauserMedic at 5:20 PM 2 comments: 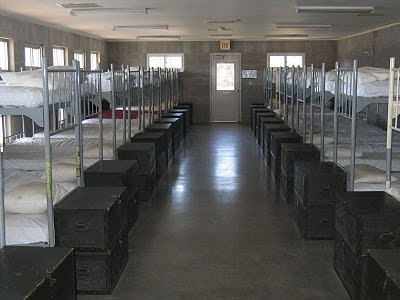 Ragin’ Dave had some thoughts on the recent statements about Don’t Ask Don’t Tell. It seems that most people, being of good nature and a live-and-let-live disposition, are willing to have openly homosexual service members. Below is my response, and thoughts, on the topic. But first, some clarifications. First, I have no religious dogs in this fight. I’m an atheist. Not the militant, anti-religion kind, but the “I really don’t give a damn what you believe unless it involves killing/pedophilia/non-consensual sex, in which case a rope and telephone poll are called for” atheist. In short, don’t try to put me in a re-education camp or kill me for the greater glory of Allah, and I won’t use you for marksmanship practice. Live and let live.

(And a short side-note: leftist, political atheists are some of the most humorless, grim, pain in the ass individuals I have ever met. Not everything is about religion, or imposing your particular belief structures on the lumpen-proles. You people (and I mean that in the full sense of the derogatory "you people") need to go drink some beer, eat some grilled red meat, try to get laid, and enjoy life. Because overall, you're a real bummer to be around)

Secondly, I have worked with, served with, and have as family, people who are gay. Call for killing them, or “fixing” them, and I’ll be on the other side from you. With a lead pipe or rifle, if it comes to that. Simply being different, without harming others, is no reason to be persecuted.
That said, here’s my thoughts (with some modifications) as posted at his site.

I'm aware of a number of service members who are gay, past and present service, in my battalion. The reaction to them has been mixed. Some have been exemplary soldiers. Some have been massive headaches due to their uber-dedication to PC principles (EO positions seem to attract pull more than proportional numbers of candidates). The main problem is this: sex (the schtupping kind) is a major force disruption on deployments and in duty environments. That's why I'm a Neanderthal; I'm still opposed to females in any field environment outside nursing, and that MOS only grudgingly. I've witnessed far too many affairs, fights, and unit cohesion issues to ever accept the equal rights/equal opportunity argument. The military is supposed to break things. Period. Sexual tension interferes with that. Sexual tension combined with revulsion, loathing, and misunderstandings won't improve things. What the military should be doing, can only be done properly by a small part of the population. Generally, the part that is willing to hurt, kill, demolish, and inflict pain, while receiving the same in return. It's not representative of society as a whole. And if truly becomes such, it will no longer be effective for its purpose. The military is part of the citizenry; the part that agrees to do what much of the rest of it isn't willing or able to do.

Homosexuality has probably always been present in humanity; certainly it is well documented since classical times. As with other behaviors, it is not always acceptable. The military environment is not the appropriate place for it in our culture.

Before the pillorying commences, let me note this. I believe there is room in our society as a whole for homosexuality. We have plenty of room for all of us to attend to our own preferences that don’t actually harm others. To paraphrase Mr. Garrison from the South Park episode “The Death Camp of Tolerance”: tolerance doesn’t mean you have to like it, just that you’re willing to put up with it. I’m willing to extend the courtesy to others, in return for tolerance for some of my beliefs that aren’t those of the majority. Just recognize, there are some areas where some beliefs or behaviors simply cause more problems than are unacceptable. I don’t attend bible camps or church groups to advance atheism, because those groups have a purpose beyond my personal convictions; my beliefs simply have no place there, and disrupt their intended purpose. “Out” service members would have the same effect in the military. Will we separate gay service members from hetero soldiers of the same gender? Isn't that why we separate the sexes currently? I can speak from experience that it can be a very serious matter to have a member of the opposite sex in one's quarter's as is; what happens when same-sex but different orientation accusations of sexual harassment begin to occur because of living arrangements or authority positions occur? How will we resolve one lawsuit because someone gay is harassed or discriminated against because they aren't put in the barracks with the other males, while another hetero male alleges harassment because he must be in barracks with someone sexually interested in him?

There has to be a line somewhere, and in this case it should be determined by what is most effective for the organizational mission.

That said, let the hatefest commence.
Posted by MauserMedic at 6:24 PM 4 comments: 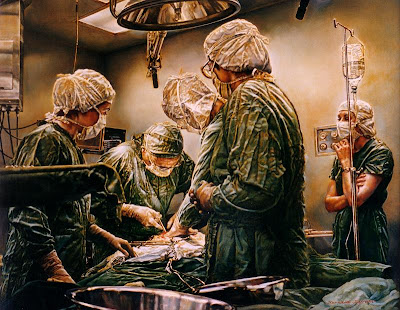 Some of the lessons being learned from Haiti involve more than technical aspects of medicine.

"Back in Boston, I'm a hot shot. The nurses have to respect me," Feliz says. "Here, I'm just a worker bee. I cleaned the OR floor after surgery. I carried dead bodies down the street. I was in traffic carrying dead bodies. That makes you human. I came here a very fancy doctor, and I'm leaving here as a humble man."

Three things make a great doctor. And only one of them is inherent talent. The others are dedicated, talented staff, and first-rate equipment provided by a society that values its members. Too often the last two are forgotten in the self-congratulation directed towards the first.
Posted by MauserMedic at 8:49 PM 1 comment: