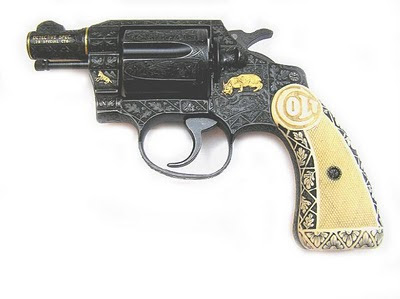 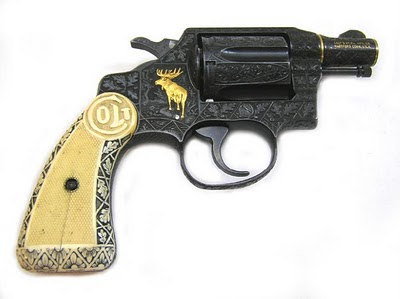 I'd say the artist who did the engraving of the grips and pistol is truly talented. But. Either the owner demanded that oddly inappropriate wildlife be included, or the artist thought if it was OK on a hunting rifle, it must be OK on any gun. Somewhere out there, a fine over/under has some beautiful scroll work with little gold prairie dogs in the middle of it.
Posted by MauserMedic at 12:24 PM 3 comments:

As always- gold is best suited to highlighting a weapon, rather than plating it. And the white on gold suggests an artistry best suited to comic book advertising.
Posted by MauserMedic at 12:21 PM 2 comments: 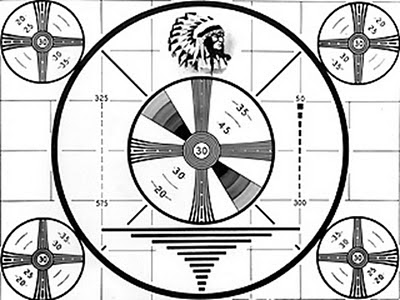 Gonna be gone for a month or so, honing my thermometer, heat rash, and IV skills in a desert environment that Missouri doesn't provide. Unfortunately, this means no comms during the training period.

I'm hoping to have some good images of the training in the latter half of October, so please stop by again thereabouts.
Posted by MauserMedic at 5:59 PM No comments:

Ah, That Takes Me Back 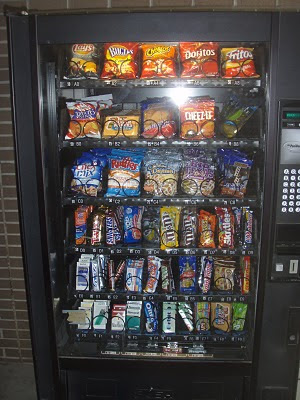 Sure, it looks like a simple, relatively current vending machine, but: 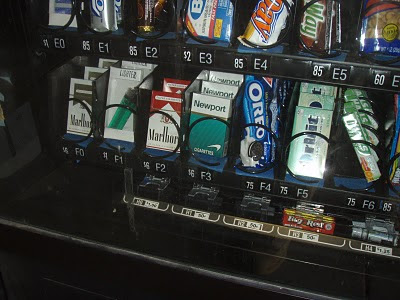 Someone on this post has a serious nicotine habit.
Posted by MauserMedic at 5:06 PM 4 comments: 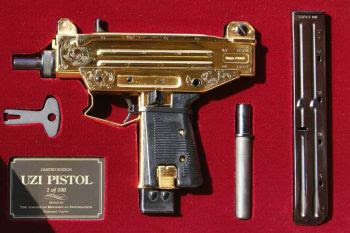 Posted by MauserMedic at 12:20 PM No comments:

It's hard to believe that much time has gone by already. I'm serving with troops on this deployment who were ten years old when the September 11th attacks took place. In one sense, it's inspiring to see that our nation has the will to drive on for this long. Unfortunately, there's still too many, even within the services, that don't understand why this will be be on ongoing war, at some level, until Islam experiences a Reformation of its own, or western civilization dies of apathy and self-indulgence. I know which one I'm aiming for.
Posted by MauserMedic at 5:45 PM No comments: 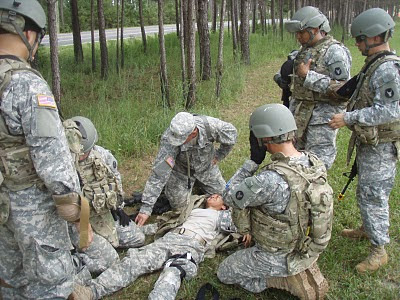 or "Combat Lifesaver", which is what a number of we medics were teaching today. As medics can't be everywhere, the Army has extended training out to other Military Occupational Specialties (MOS) so they can be first responders. As with the medics' training, the focus is on HABC (Hemhorrage, Airway, Breathing, Circulation), with the goal of reducing preventable deaths through simple interventions. 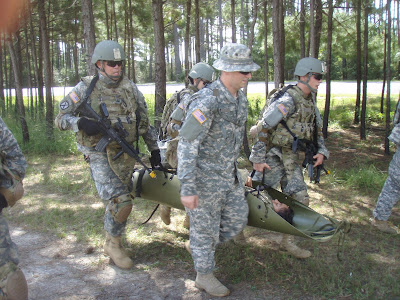 Once again, the training is in 90+ degree temps with high humidity, resulting in one Soldier getting pulled to strip out of his armor, gloves, and pads just short of a heat injury. These Soldiers will test out on hands-on and written exams tomorrow to demonstrate competency in tourniquets, needle decompression of pneumothorax, nasopharangeal airways, wound dressings, requesting medical evacuations via radio nets, and moving injured personnel. 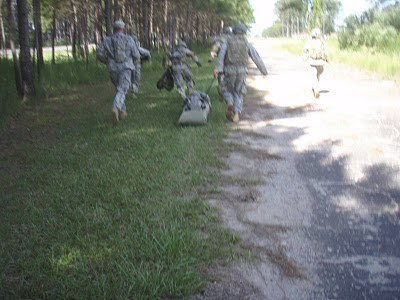 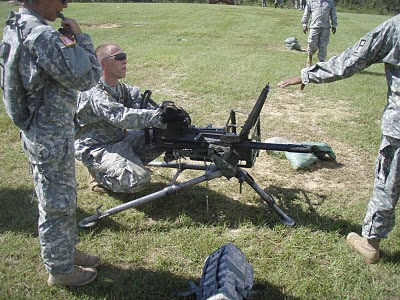 Ninety-Pound Partner and I have been assigned range support for the Mk 19 Grenade Launcher this afternoon (that would be her at the far left, demonstrating why she has the nickname). Range support is good duty for medics; make sure everyone is hydrated, watch for signs and symptoms of heat injury, and be ready for anything else that can happen on a weapons range. While most people might think weapons-related accidents are a priority, it's actually heat injuries that are most common. At this moment, the range has an ambient temperature of 90 degrees, there's minimal shade even off the line, and firers must wear full armor. Not a good combination, even for younger troops. That's why the Army has provided with all sorts of wonderful handouts, such as the one I recently found in the latrine: The Army loves handouts, and apparently so do soldiers.

And now, NPP and I will wait to see if it's true about some soldiers not showing up, which will result in much happiness and explosions downrange for the medics.
Posted by MauserMedic at 2:31 PM No comments: 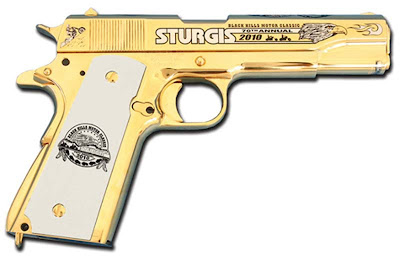 Someone has taken two of my favorite things, and combined them in a way that's incredibly tacky.
Posted by MauserMedic at 12:07 PM 2 comments: 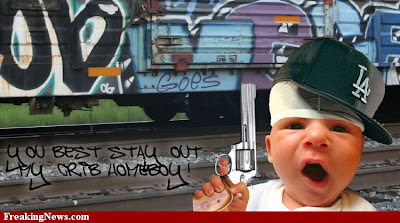 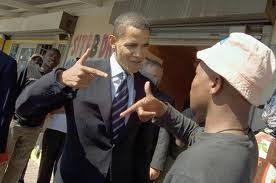 Jackass.
Posted by MauserMedic at 1:54 PM No comments: 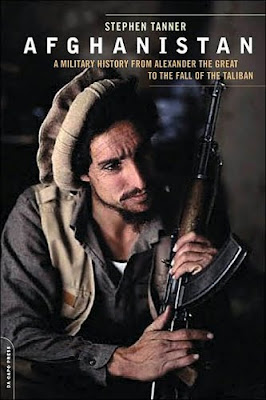 All men by nature desire knowledge.

Along with strictly military training, the Army also has mobilizing units become familiarized with cultural aspects of Afghanistan. Unfortunately, there isn’t a great deal of time dedicated to this activity; it’s more of a very brief familiarization with various ethnic groups, languages, and current customs in the form of a PowerPoint presentation or lecture. We have been given CDs with Dari and Pashto instruction on them, which is a significant step in the right direction, although it’s generally up to the individual how much effort will be put into using them.

Several of us have found a number of books regarding Afghanistan for sale on post. I’ve just finished Stephen Tanner’s A Military History From Alexander The Great To The War Against The Taliban. There’s a considerable amount of information here that I’ve never encountered in or outside the military.

From 2001, it had been my impression that Afghanistan was essentially a nation-state that had failed. After reading the history of ethnic migration and settlement over the last millennia, combined with the interaction between these groups, I have a much different understanding of what makes up the populace, and how vastly different they are from one another within the current borders, as well as compared to the Western concept of the nation-state.

Also new to me was the role Pashtuns historically held in government and social structure. This hasn’t been touched on at all during our briefings, yet it’s the Pashtuns who comprise the overwhelming majority of the original and current versions of the Taliban. The Taliban is addressed in the final pages. The author notes what he believes to be some of the changes the Taliban has undergone in the past decade, and has an interesting perception of what may be required to arrive at some semblance of a stable society in the region that isn’t commonly encountered in the military.

For those that have an interest in our ongoing commitment to Afghanistan, I’d strongly recommend reading this book, as it reveals the complexity of a truly multicultural society within a conservative Islamic tradition.
Posted by MauserMedic at 12:17 PM No comments: