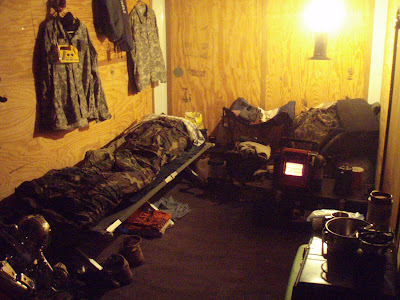 In the spirit of getting ready for the upcoming deployment, I've been going with the basics during the drills 3/4 of the state away from my home. From what I've seen on other blogs, my quarters will probably look a lot like inside of my bike hauler, as seen above, except perhaps the space will hold two people rather than one. And there won't be one of these a few feet away: 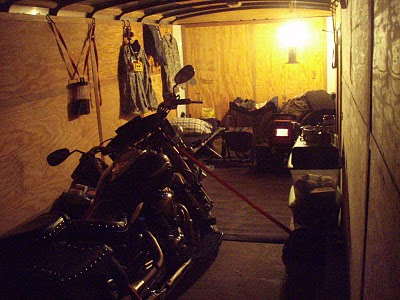 And that, my friends, truly sucks.
Posted by MauserMedic at 6:33 PM 3 comments: 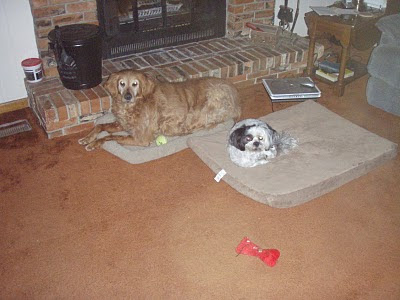 Dogs don't understand it.
Posted by MauserMedic at 7:04 PM No comments: 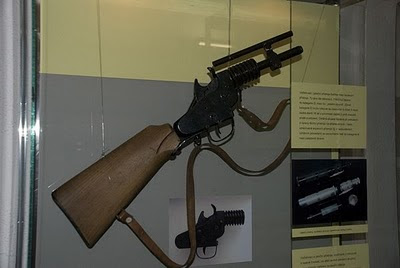 Posted by MauserMedic at 8:11 AM 5 comments: 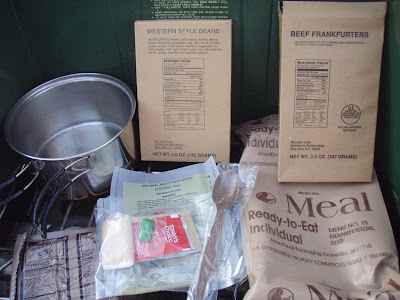 So, the experiment was undertaken. Can a ten year old MRE be eaten without ill effects? Especially one known as the "Four Fingers of Death"?

Let's open things up and find out!

First, the beans in tomato sauce: 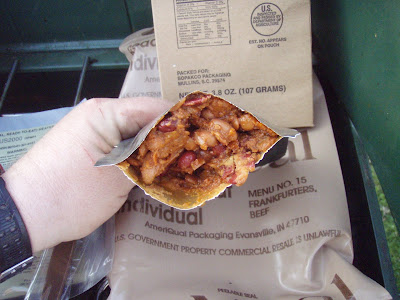 Looks awful. Just like it did when it was freshly packaged. No odd scents......scratch that, no unexpected scents.

But what about the wieners (is that a great name for a film or what)? 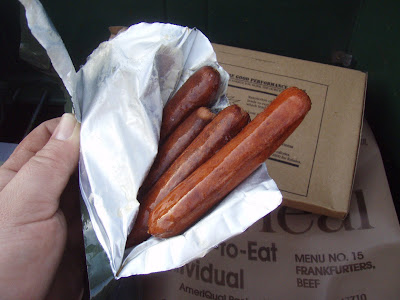 True, they do look somewhat aged, but still no smell of decay. At least not similar to a deer in the ditch on a hot summer day, which is my personal reference standard.

So, into the pot (No, I didn't use the MRE heater; I just wanted to see if I'd get botulism, not torture myself). 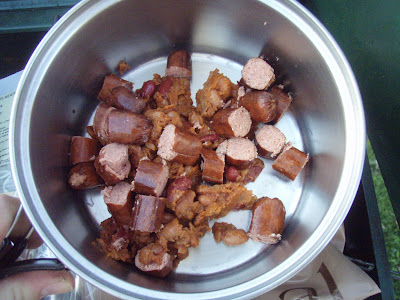 It looked like Van Camp's Pork and Beans with Little Smokies cut up in them. But really, really salty. And you wouldn't have wanted to sleep in the same room with me. Draw your own conclusions there. But no stomach cramps, vomiting, or death. Again, much like when the pack was brand-new. So rest assured, if you have a decade-old Beef Frankfurter MRE in your basement, you can eat with a reasonable expectation that you may not become poisoned.

As long as you're not in an enclosed space without circulation.

Posted by MauserMedic at 7:44 PM 5 comments: 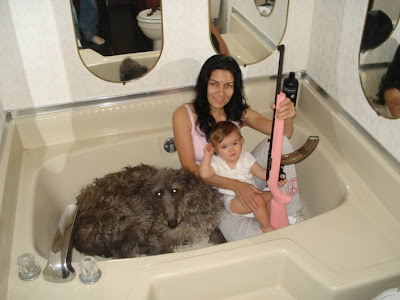 Borrowed from Mr. FreeMarket, a picture of a pink Ruger 10/22. In the bathtub, held by a woman with a peace sign on her pants. Who is also holding a small child who has her fingers inside the trigger guard, which is directly behind the magazine well in which a magazine resides. Oh, and apparently a giant rat. I think.
Posted by MauserMedic at 7:13 PM 5 comments: 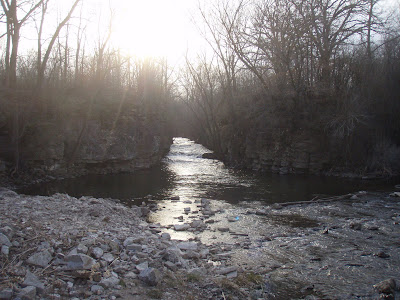 I had been doing a lot of hiking in one of the local nature areas (above) with a previous generation rucksack to get ready for the upcoming deployement. Until the day after the most recent hike; two significant deposits of fluid around my knee, and a reduced range of motion that was very noticeable.

The injuries from the 2003 call-up are catching up with me, along with four-plus decades of use.

Shortly after this happened, my 1SG told me he'd seen my name on a unit assignment list for the upcoming deployment. I won't, unless something changes, be out humping a ruck with the infantry. I'm too old and too broke, although it was put to me in kinder terms. And I was disappointed when I was told, although I know it's true. I'll still be allowed to go, because I can still contribute in a couple different areas without compromising anybody.

But it still sucks to realize you can't keep up with the people at the tip of spear.
Posted by MauserMedic at 7:21 PM 1 comment: 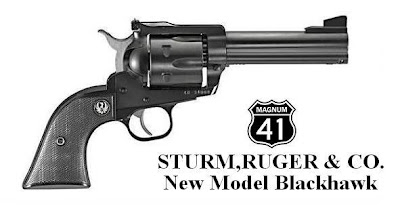 Been reading his stuff for awhile, but hadn't moved him to my "blogs I read daily" list".

Knuckledraggin'
Posted by MauserMedic at 6:40 PM No comments: 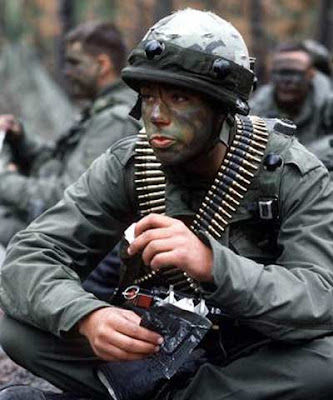 It's another extra-long drill weekend on the path to deployment. Apparently we'll be running about the armory in our field gear for "warrior tasks". This used to be called Common Task Training (CTT), but apparently it wasn't sufficiently studly sounding. Personally, I think it sounds like a bunch of people running around in loincloths with spears, but I'm just a peon, so "warrior tasks" it is.

But there is one truly dangerous, soldierly thing I'll definitely be doing this weekend. And here it is:

Is the 2000 year of production Four Fingers of Death MRE I pulled out of my emergency stash still edible?

We'll find out!
Posted by MauserMedic at 8:27 PM 4 comments: 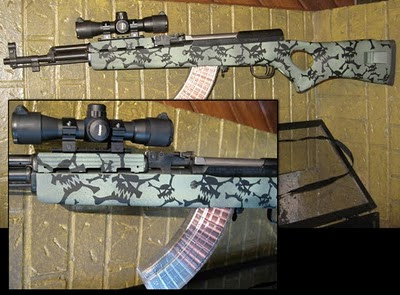 Matching skateboard not included.
Posted by MauserMedic at 8:12 PM 6 comments: 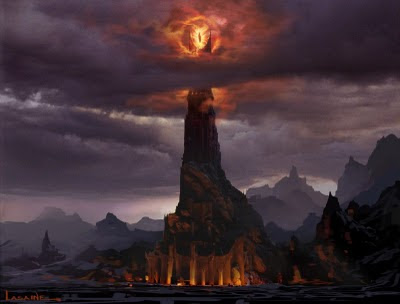 when Lord Of The Rings starts on TV, the wonderfully impressive scene of Barad-dûr covered in burning torches begins, and the first thing to come to mind is how Orcs perform supply-chain management for pitch resupply.
Posted by MauserMedic at 6:37 PM 1 comment:

Shots From The Road 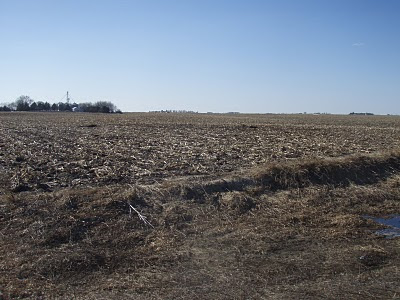 Springtime in Iowa. How could anyone want to live somewhere else, when you have vistas like this? 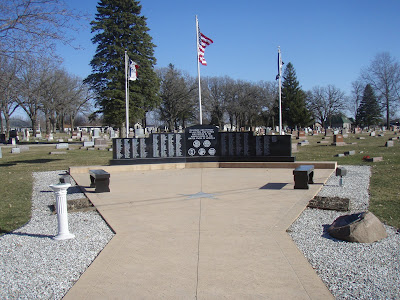 In all seriousness, midwestern small towns often embody values that I wish we'd see more often in our politicians. This monument may be small, but relative to the size of the town it's in, it wasn't cheap. Especially in terms of the names on it. 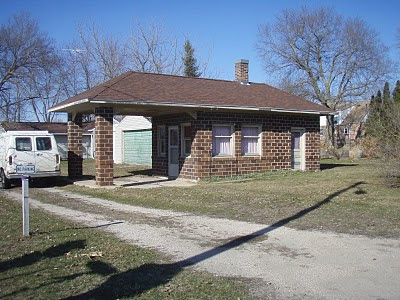 You can still find some old gas stations scattered here and there, although most of them have gone through a host of different purposes over the decades.

With a little luck and some time, I'm hoping to get some more riding time and pictures in before deploying. I'm definitely not a photographer, but there are many interesting (to me, anyway) things I run across on the bike; stopping to get a closer look makes the ride even more enjoyable.
Posted by MauserMedic at 6:08 PM No comments: