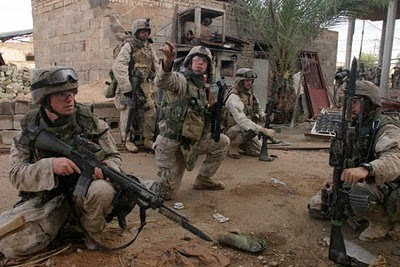 There were some interesting posts over at Sipsey Street on the topic. Most interesting of all, the LTG personally responded to MVB's post on the subject. I thought it was an interesting and gracious response, but I still believe there is a place for the modern version of the pike, especially in urban fighting.

One particular portion of the General's response I would like to respond to: the question of how it must not be that important, as there has been no further training on the subject after Basic Training. I would submit that this is an error in emphasis, rather than an accurate evaluation of the importance of the training. I can tell you from experience that in my nearly twenty years in the Guard, we have had no further bayonet training; but we have had virtually no serious marksmanship training either, unless one includes remedial training the day of annual qualification. Which to receive, one must fail to qualify at least twice that day. Hand to hand skills training? Once, for a select few. Extended sensitivity training sessions? Mandatory attendance, every year, for several hours at a time.

There's time, and a need, for maintaining combat skills, especially for the non-infantry types like me. I enjoy field work, and weapons craft; there's a hell of a lot of soldiers who don't, and they'll be in a world of hurt when they need those skills.
Posted by MauserMedic at 9:55 AM 1 comment: 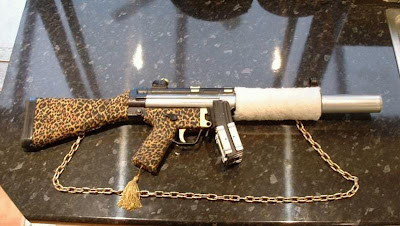 If you own something like this, I'm betting you also own a car that looks like this: 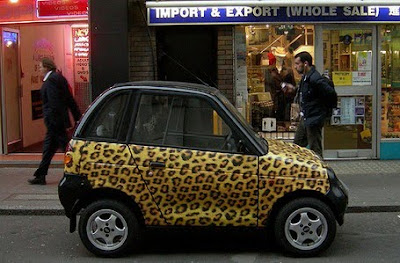 Posted by MauserMedic at 9:35 AM 6 comments: 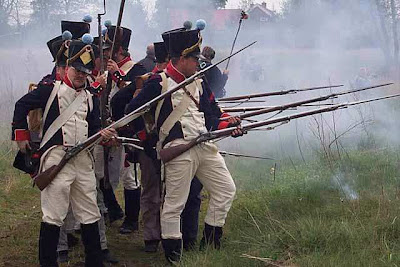 I note that one of our generals feels that the Army is trying to teach too much in too little time during basic training these days. So, something must go. Such as bayonet training. After all, as he puts it:

In today's wars, there's no reason for Soldiers to learn how to fix bayonets to their rifles and disembowel an enemy combatant, Hertling said. Besides, bayonets don't fit rifles Soldiers carry today, he added.

Let's address a few things here. First, the man is an armor officer. How much time has he spent with troops whose main defense against attack is a rifle and a hole or some sandbags, rather than self-propelled steel and composite armor? Second, if there's a greater need to teach troops hand to hand combat techniques (literally use only their hands, per his comments) what basis is there to take a weapon that permits a soldier to keep an enemy at a little more distance? In the upcoming deployment, if I'm in a direct support position, you may be damn sure I WILL NOT have complete and utter faith in my rifle. ALL rifles can fail, or need a reload at the worst possible time. Because of this, I WILL carry a knife suitable for punching a nice, deep hole in someone's viscera. Most likely, it'll be the same surplus Viet Nam era M7 bayonet I carried that last time I had to tote a rifle everywhere. And because I believe two is one, and one is none, I'll have a back-up beyond that. Entrenching tools can hold a hell of a sharp edge. Enough said. Hands are a the last option. They're soft, easily injured, and don't punch through a skull or lacerate major arteries with the authority I'm looking for.

Now, he says that bayonets don't fit the current rifle. My current rifle is an A2. It still fits. I'm told I'll be getting an M4 once deployed. Haven't played with one yet. From what I've read, the M7 fits it also. If anyone knows the answer to that, I'd like to hear it. But either this General doesn't know what he's talking about, or we have what I believe is the first widely, although not standard issue, Army rifle without bayonet capability. And that's foolish, for a number of reasons.

As noted previously, rifles do fail, especially dirty M4s using a high rate of fire, from some reports I've read. And something sharp, pointy, and a couple feet long is better than a Mark One Rock or fingers. But there's other uses. Bayonets also work well for display of force purposes in crowd or prisoner control. They are suitable for poking about in spaces you'd rather not put a hand into. Properly designed, they are fine fighting knives. Apparently, that's not good enough anymore. There's just not enough time for something so unimportant as a combat skill.

Somehow, I'm guessing there's some Equal Opportunity lectures that could be delayed until after basic. Unless sensitivity training is one of those vital skills for fighting the Taliban in Afghanistan.
Posted by MauserMedic at 9:42 PM 9 comments: 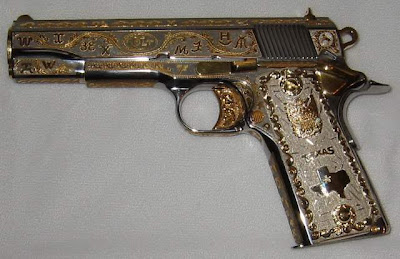 Over-the-top Barbeque Gun. Meh. I'd put more effort into it, but I was on-call Weds-Thurs, National Guard Fri-Sun. And prepping for Afghanistan, there's going to be a lot more drills. Apparently our particular section of the Guard hasn't done a call-up on this scale since WWII. One can imagine how well prepared the admin elements are at the state level for this. Things will proceed apace, as they always do, and sooner or later, I will be in another armpit of the globe.
Posted by MauserMedic at 8:29 PM 2 comments: 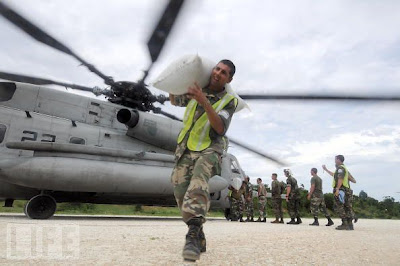 The more I watch Haiti coverage, the greater the impression that:

Most countries with wealth (say, Saudi Arabia) really don't give a damn;

Most of those remaining can't project power worth a damn;

The U.S. military is the pre-eminent power-projection organization in the world;

The UN and full-time relief agencies have a serious case of the ass over the preceding being made clearly evident;

The UN and full-time relief agencies approach to providing aid has all the moral underpinnings of hotdog-cart vendors fighting over location for the best visibility and cash flow.
Posted by MauserMedic at 8:44 PM 1 comment: 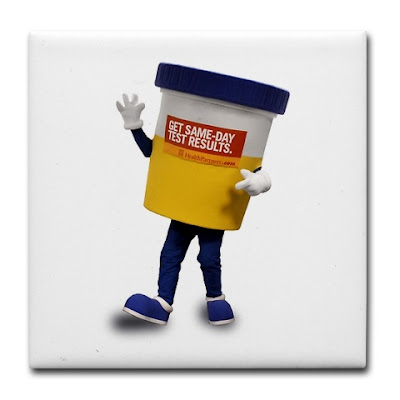 Who the hell plans the monthly "surprise" urinalysis test for the night the troops have to board a military version of a schoolbus and travel for two hours to their duty? Number one, there was a two-hour delay while some slammed water for over an hour to provide specimens. Two, THERE'S NO LATRINE ON THE BUS.

I'm guessing this was laid on by someone with a paygrade higher than most who had to take the test. No inconvenience to them, therefore no problem. Nice.
Posted by MauserMedic at 9:22 PM 1 comment: 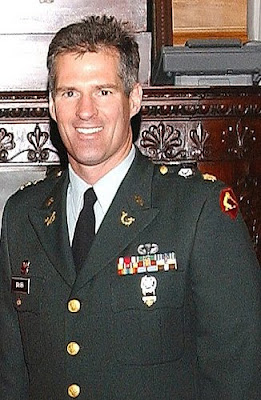 Coakley has conceded, I've popped a bottle of champagne, and the dogs have victory biscuits.

Over three decades of Neo-Feudal rule finally flushed down the toilet; Obama's effort shown to be of null, if not negative, effect; and a National Guardsman in the Senatorial Seat.

Oh, life is good at this moment.
Posted by MauserMedic at 6:32 PM 3 comments: 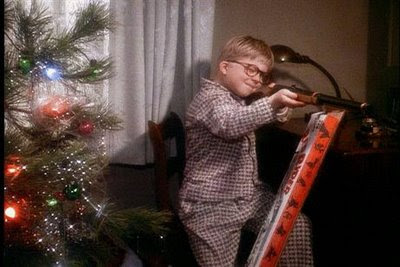 When I was a kid, the night before Christmas was second only to the event itself. The anticipation of longed-for wishes coming true would leave me as wired as a kid fed nothing but sugar and caffeine on an empty stomach. And when those wishes did come true, the entire day was golden. I haven't felt that way in years. Until the last couple of days of the Coakley-Brown Senate race.

Voting happens tomorrow, and it feels like Christmas Eve back in the '70s.
Posted by MauserMedic at 5:07 PM No comments: 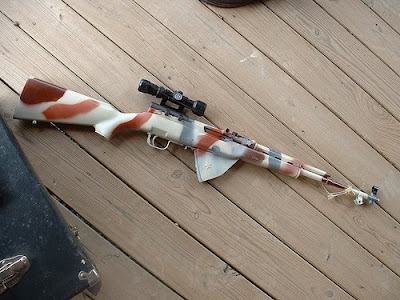 Wanna-be sniper rifle, or budget coyote killer? The owner might have a little luck with option number two, as long as the critter's not too far out there. Either way, breaking up solid colors is fine......as long as the sun isn't bouncing off that shiny, shiny paint.
Posted by MauserMedic at 1:12 AM 2 comments: 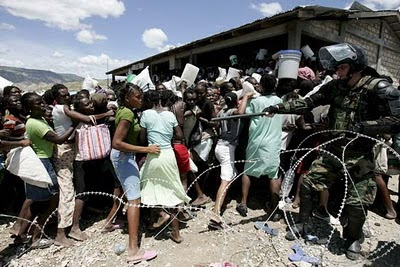 No infrastructure, minimal food, water, and authority. American military forces deployed to distribute aid and enforce order. A local population that expects aid quickly, and seems to be getting more violent as those expectations aren't, and probably cannot, be met.

At some point, there will be riots when food isn't handed out quickly or widely enough. A bad situation when those handing out the food are armed; someone will try to push their way through, or take a weapon during a riot, and shots will be fired.

I don't believe this will end with happy locals smiling while they open the MREs on camera in the end. And we'll be lucky to exit that sad nation without losses of our own.
Posted by MauserMedic at 10:41 AM 5 comments:

The Joys of Dog Ownership 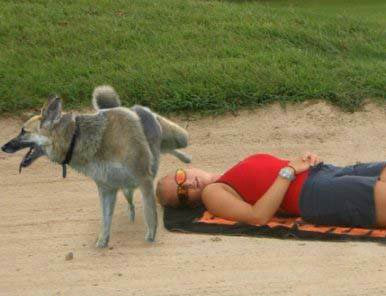 Nothing sets off a Friday evening like coming home from a long day at work to find that all three dogs decided bladder control just isn't that important.

But they're still better than a critter that shits in box then walks all over your kitchen countertops.
Posted by MauserMedic at 9:17 PM No comments: 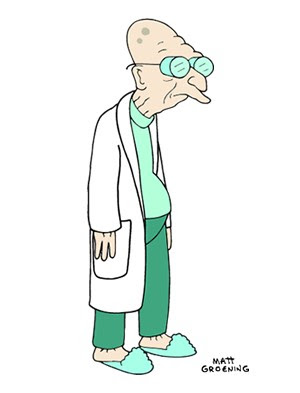 It's absolutely fine to critique young physicians in their fellowship when you're the established physician who is demonstrating techniques in a procedure. But it may be wise to accept the fellow's placement of a needle and then a guide wire into a major vein if it's within acceptable parameters, even if it's not exactly the spot you prefer to place it. Because when he does it the first time, then has you pull it out, tell him exactly where it should go, and lecture on the technique to do so, but it takes you a quarter-hour and a lot more attempts to actually achieve the same thing..............

Let's just say I'm sure he'll remember you.
Posted by MauserMedic at 4:21 PM No comments: 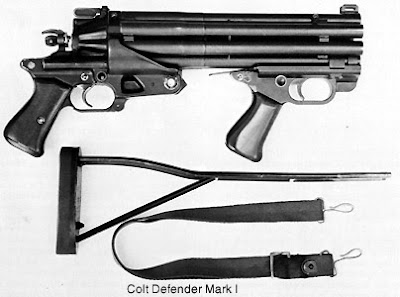 Long before there were freakish mega-destructive video game weapons, there was the Colt Defender Mark I. 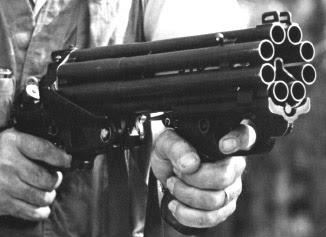 A design that was finalized in 1967,the gun had eight 12 inch barrels were joined together around a central axis. Overall length was 17.75 inches with a weight of 8.6 pounds. The weapon was fabricated with an aluminum alloy receiver with steel inserts covered in an epoxy paint finish. But, there was little military interest, and attempts at civilian sales we unsuccessful.

That might be different today. I have a feeling there's a lot of young men who would buy one of these if they were featured in some of the major First Person Shooter games.
Posted by MauserMedic at 7:03 PM 9 comments: 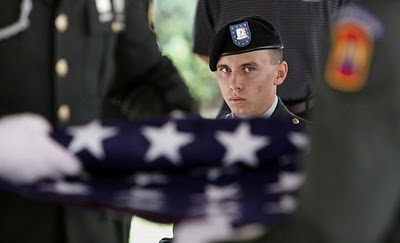 A story about the lack of it, and those who still embody it. Good for the young soldier (above, at the service). I'd consider it an honor to meet him, and to buy he and his girlfriend a steak dinner if they're ever in the neighborhood.
Posted by MauserMedic at 6:09 PM 1 comment: 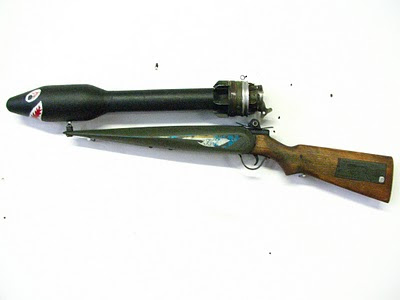 I vote we distribute lots of these in Yemen. Warheads fused for five meters, and lots of propellant.
Posted by MauserMedic at 6:08 PM No comments: 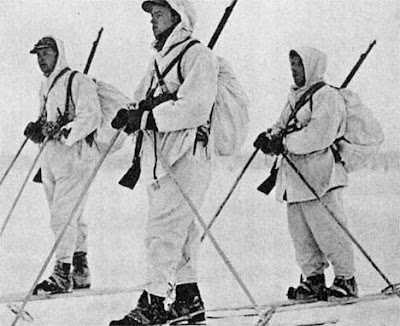 As I type this, it is 5 degrees (Fahrenheit- I'm old, so sue me) in Moscow, Russia. On the other side of the wall I'm next to, it is -15. Fueled by a steady diet of beer and cheese, the Midwesterner is perfectly adapted to winter combat conditions. Thus, in preparing for deployment to Afghanistan (Kabul temperature, 34 degrees; positively balmy) I will continue working on the diet that has made me the optimal combat machine I am today- Sam Adams and string cheese. Of which I've already had several. Cheers!
Posted by MauserMedic at 7:02 PM 4 comments: