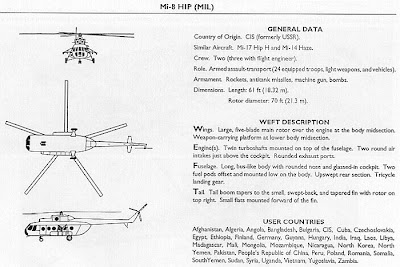 A long time ago, I used to study playing cards with images like this on one side. Saddam Hussein was in Kuwait, and we would be there soon; with the "third largest army in the world", it was sure to be a long, bloody conflict. Some thirteen years later, I was studying them again, for virtually the same reasons, although this time the conflict would supposedly be brief. So much for predictions. Twenty years after first sorting out the differences between NATO and Warsaw Pact aircraft, I now literally step out my door and watch this on a daily basis:


It's both amusing and disturbing at the same time. I'm surrounded by Soviet-era designs and former Warsaw Pact military personnel, something I never would have expected when I was growing up. For me, it's still novel to interact with all this, having grown up under Ronald Reagan. Yet it's distubing, in reminding me how much the world has changed in such a short time. Many of the young soldiers I work with now were born when the old political order was ending. A helicopter is a helicopter. Bulgarian, Georgian, Turkish, Mongolian and Afghan soldiers everywhere you are? Just another day on deployment.

Then again, their time will also come, when all seems unaccountably changed.

In the meantime, I'm hoping to see again what I caught a brief glimpse of (what a day to not have my camera with me) passing overhead last week: 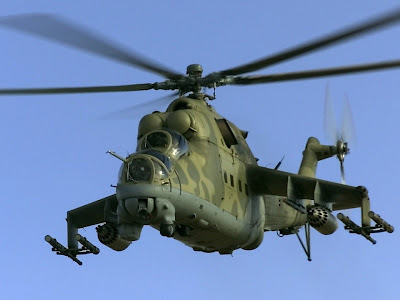 A Hind heading out towards the mountains around Kabul. And if I have the good fortune to catch one landing at the field less than a quarter-mile away, some aircrew is going to be pestered by a middle-aged American with a camera until they give in.

Posted by MauserMedic at 9:25 PM 2 comments: 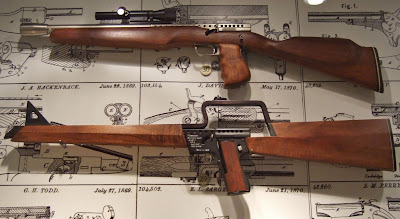 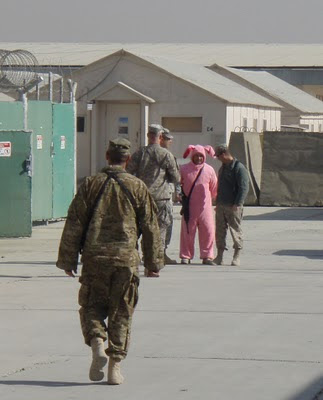 It's the Christmas Bunny of the Apocalypse! 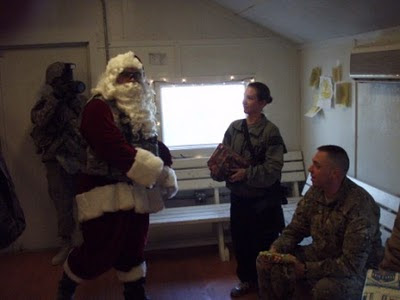 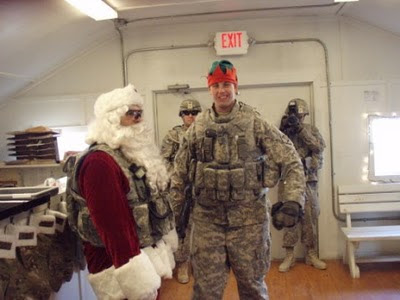 Along with his massive bodyguard elf; 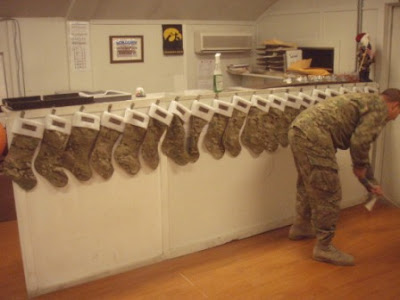 And now I know where I can find patch material for my OCP uniforms. 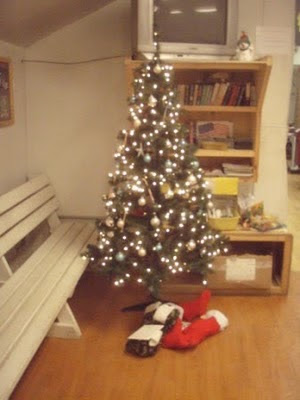 Posted by MauserMedic at 8:23 AM 4 comments: 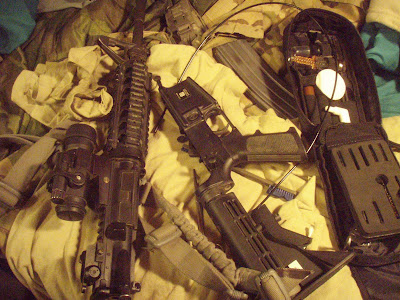 A disassembled M4, the scent of CLP in the air, Freak On A Leash playing on the iPod, and lots of sneaky bastards on the other side of the concrete wall who'd love to kill me. It warms me shriveled little heart, it does.
Posted by MauserMedic at 8:56 AM 4 comments: 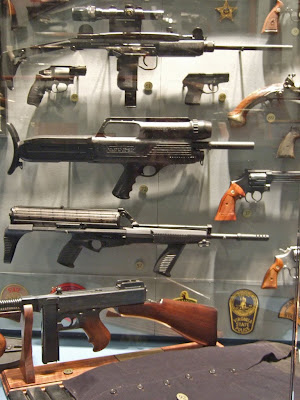 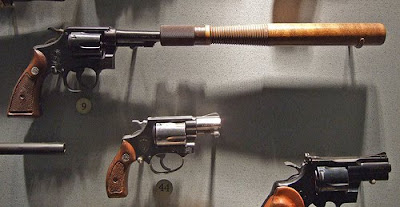 A Day At The Range 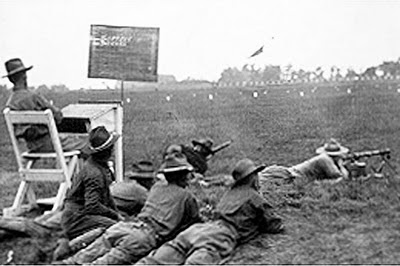 Recently went to another post in the area to check zeros on the rifles. Of all the ranges I've been on, this one probably has the most impressive berm: 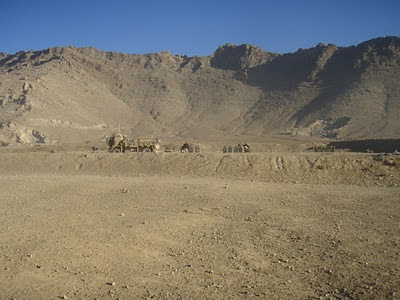 Somewher around 1600 feet of vertical rise from the range, I was told. But then it was time to get to business, which meant getting down in the talcum-like dirt that coated everything in short order. 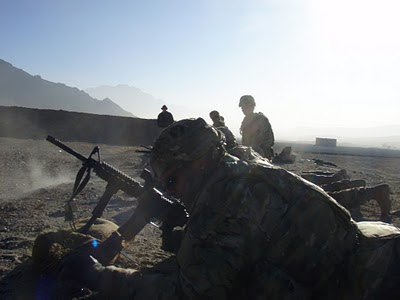 After verifying zeros, we headed back out towards the gate. On the way, we passed by an armor graveyard from the Soviet-Afghan war: 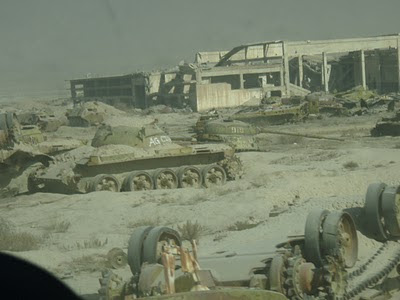 Including this interesting piece, which is a T-34/85 if I remember my Soviet armor correctly. 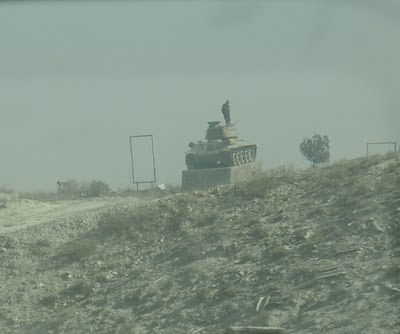 Oh, to have the chance to haul that back home....
Posted by MauserMedic at 5:38 AM 2 comments: 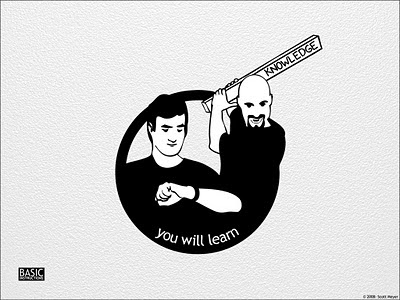 How is it that three people with acute diarrhea (I've gone to the latrine four times since midnight! OMG! Do something!) can come into the Troop Medical Clinic convinced that they absolutely must see a doctor immediately, while another individual will put up three days of unilateral testicular pain that radiates into his abdomen before finally coming it to get it checked?

Why are physicians unable to comprehend that when one individual is doing the blood draw, documentation, urinalysis, Toradol injection, and IV access, that it will not all be complete in less than five minutes. Or that morphine isn't kept in the unlocked cabinents with the ibuprofen, and the medics don't have free access to opioids at all times? And why is it they're extremely irritated when I ask them the proper route and rate for drugs that they administer freqently, but that medics have rarely, if ever, been given the opportunity to handle? It must be a real bitch to not have nurses to do all the legwork for you like in your civilian practice, and now you get to see what happens when you don't let medics do anything but vitals and patient registration for years.

But there was one moment of happiness in all this: while agreeing with one of the diarrhea patients who just couldn't understand how he could get sick,that washing one's hands is indeed an excellent personal habit, the detailed education on how hand to mouth fecal transmission happens in densely populated work and living areas seemed to really horrify him.

I take my little bits of schadenfreude where I can.
Posted by MauserMedic at 10:15 AM 3 comments: 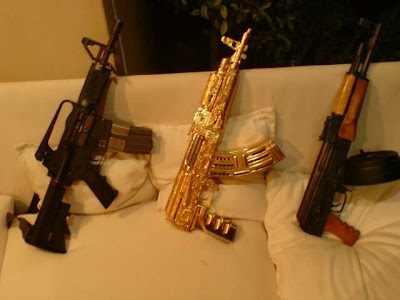 This Needs To Happen More Frequently

H/t to Sipsey Street Irregulars
Posted by MauserMedic at 8:46 AM 2 comments: 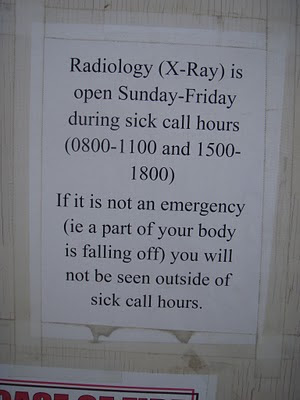 Us medics are full of it!
Posted by MauserMedic at 8:11 AM No comments: 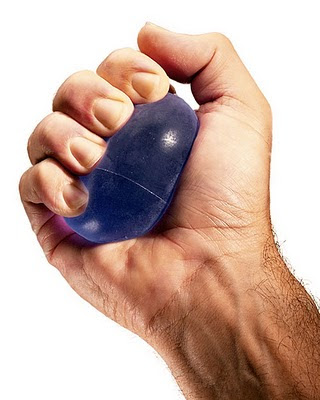 Based upon a recent encounter in the Troop Medical Clinic, a few thoughts.

Empty your bladder before going to bed, even if the latrine is 50 yards away and it's cold. If you're not willing to do that, find a plastic bottle larger than twelve ounces to urinate in. If you're not willing to do that, work on stopping your flow using the muscles in your pelvis, because even though your junk is made of tissue capable of flexibity and expansion, it isn't suited to containing the force generated by suddenly clamping off the urethra while you switch bottles. And if you're suddenly peeing bloody urine immediately after doing so, then no, you don't have an acute onset UTI or renal cancer. You've only torn your urethra.

Enjoy urinating for the next several days.
Posted by MauserMedic at 11:45 PM 2 comments: 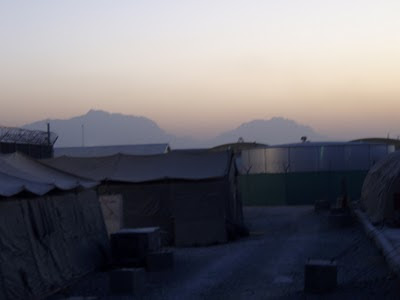 New lesson learned today: Running as fast as possible while wearing full battle gear in a high-altitude and poor air quality environment will leave you on your knees wondering if the 150 lb Sergeant next to you can haul 300+ lbs of passed-out Sergeant, armor and weapons to the TMC.

(That's an early-mornin view locally. The haziness is all smog, and that's the good part of the day. In a few hours the mountains are completely obscured.)
Posted by MauserMedic at 8:59 AM No comments: