Man, hanging out and saw an MTV offering that was all Headbangers Ball videos from the '80s.

I was in high school and college then. Who knew metal was the leading edge of transgenderism mental illness/style? 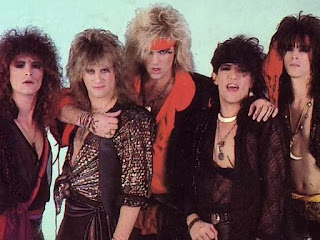 Posted by MauserMedic at 8:54 PM 4 comments:

K31: Back to the Drawing Board

Took the K31 out with the correct cartridges recently. 24.0 grains of IMR 4198 with a 130-grain cast plain-base bullet. First three shots at 50 yds within 1.5 inches; then six, eight and ten-inch groups, if I could dignify them with that term at 50 yards.

Plus, the additional new knowledge that the load apparently isn't high pressure enough to prevent blow-back through the bolt. Had a nice black soot streak down my cheek by the time I was done.

So, is it the barrel or is it the load? A quick way to find out is switch back to milspec loads, or close to them if the originals are unavailable (or too damn expensive). So a load consisting of 37.8 grains of H4895 topped with a Winchester 147 grain FMJBT was whipped up yesterday and taken to the range.

This time, groups averaged 3-4 inches, usual due to one flyer adding an inch to the groups. At this point I'm sure it's me, due to my bifocals: first that I'm old enough to need them, with all that entails about my vision and secondly, this is the worst pair of glasses I can recall having as far as useful percentage of lens. Won't be going back to the vendor for the next pair.

Regardless, I can see the barrel is fine as military surplus goes; the most recent load is mild to shoot (at least wearing a sweatshirt and Carhart jacket) and easy to make. Think I'll load up another batch of these and do some 100 yard shooting in a weekend or two.

Posted by MauserMedic at 7:20 AM 5 comments:

Not only can one chamber 7.5 French in a 7.5 Swiss chamber, but it will shoot reasonable well. Other than a blown-out shoulder on the cartridge. Next time, double check the cartridge box.

Posted by MauserMedic at 5:03 PM 5 comments: 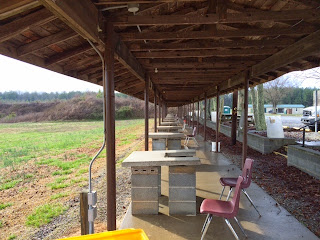 Be the only person on the rifle range; 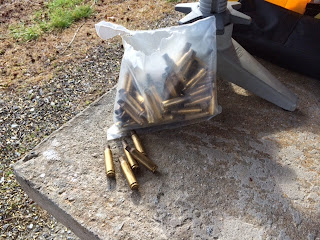 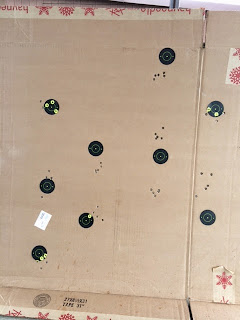 Posted by MauserMedic at 7:51 PM 3 comments:

Did I Order That? 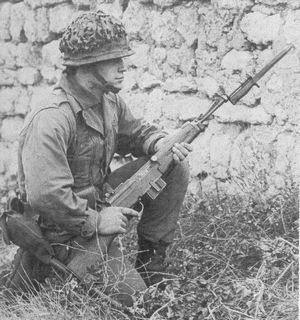 Got around to shooting some handloads through the MAS 49/56 that I loaded five years ago. 7.5 x 54 French made from 6.5 Swedish with 147-grain FMJ bullets. Nothing phenomenal for a group, but just fine for recreational shooting. The 49/56 was very pleasant to shoot, but having only twenty rounds was unsatisfying. Fortunately, Graf & Sons happened to have 7.5 x 54 brass, so a hundred rounds was ordered that night. Along with a pack of 150-grain FMJ bullets. I thought. What I have is a hundred rounds of correct brass, and one hundred 168-grain HPBTs. Too heavy for a round originally set up with a 139-grain bullet. I'd be irritated but......even if I didn't pay close attention when ordering, I also shot twenty five rounds of 7.5 x 55 Swiss through the K38 that day, topped with 180-grain cast bullets. Which are a little tougher to close the bolt on with a straight pull compared to most of my other bolt guns. I generally prefer to shoot cast through my bolt guns, because it's cheap and light recoiling, but I think I'll except the K38 from that. I have some 147-grains I can through on the French brass, and the Swiss normally runs a 174-grain....... I can work with what showed up.
Posted by MauserMedic at 6:32 PM 1 comment:

Now I remember why I don't shoot this one more often..... 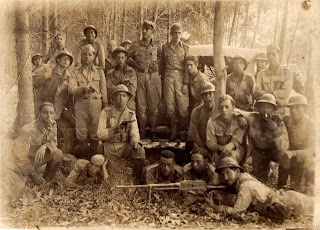 With limited time to shoot lately, I more often grab a handgun for some range relaxation. Poking about in the safe today, I noticed a long-ignored Brazilian M1937. As I had a recently made box of 230 grain LRN handy, that was the choice of the day. Although I'm not a Smith & Wesson collector, I do think highly of their revolvers. And the .45 ACP is my favorite handgun cartridge. That said, today's range session reminded me that the original grips on this model are not conducive to extended shooting sessions. As in, each shot is like catching a strongly thrown baseball without a glove. The cylinder release plowing a groove into my thumb isn't the enjoyable either. That said, I doubt I'd notice either of these were I to actually need the revolver instead of shooting it for fun, a sentiment I'm sure Brazilian soldiers carrying these in the Italian campaign of 1944 shared.
Posted by MauserMedic at 5:43 PM 2 comments: 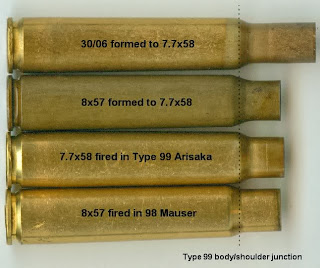 Apparently I need to up the pressure in my cast bullet loads for my Type 99. I'm using reformed Remington 8mm Mauser brass, as 7.7 brass was rare when I wanted to load these. There were a number of shots where there was a fair bit of a smokey breeze coming out of the wrong end of the rifle, and a good inch of soot down some of the cartridge case. Think I'll switch the load from IMR 4227 over to Winchester 748; Win 748 runs higher pressures for cast loads at similar velocities, which should form that case to the chamber nicely. Or blow smoke into my face at even higher pressure.
Posted by MauserMedic at 3:43 PM 4 comments: