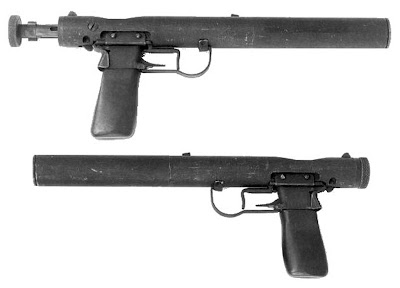 The Welrod was a British bolt action, magazine fed, suppressed pistol devised during World War II at the Inter-Services Research Bureau (later Station IX), based near Welwyn Garden City, UK, for use by irregular forces and resistance groups. Approximately 2,800 were made. 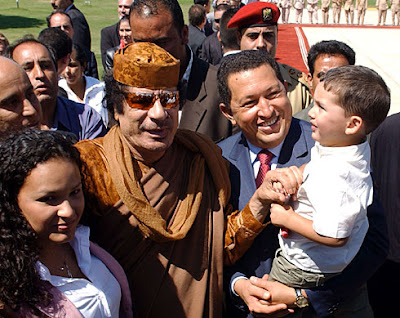 Here's a few brief thoughts from someone who's on his third deployment:

What's there that is worth risking our people? Oil? If we developed our own resources, and partnered more with stable western nations (think Canada), that wouldn't be a factor.

Protecting civilians from a murderous regime? Then we're a bit behind the curve, and best get to work on China, North Korea, Iran, Yemen, Sudan, ad infinitum.

Fostering representative government (I'll address "democracy" in a moment) with free citizens? Outside of Turkey, which is doing a fine job of moving towards theocracy, and Iraq/Afghanistan, where the vote is (poorly) ensured by western guns, Islamic nations generally replace one dictator for another. Whether the stage mask is Arab Nationalism or Islam, the repressive policies and police state are largely interchangeable.

Fostering "good will" in the Arab Street/Islamic World? How dense must one be to not understand that the ASIW will always despise anything different from their way? I would deeply appreciate any examples of long-term gratitude resulting from efforts on the ASIW's behalf that isn't tied to continuing donations to the local economy or political entity.

As to fostering "democratic governments": democracy, in the concept of one person, one vote, is merely a step above mob rule, where demagoguery, ignorance and impulsiveness meet. E.g., the fine results the California referendum system has produced in which the handouts of goodies has no relation in reality to their cost. At least representative government takes time and compromise, if the citizenry hasn't become overwhelmingly addicted to benefits based on borrowing, promises, and cynical manipulation of statistics (which brings us to our current looming disaster economically, but that's for another post).

The one great flaw the current administration committed before taking action now, was in not clearly stating that it was an internal matter. Period. No planes, no troops, no warships. Stand or fall, and seek aid elsewhere. If we were to send them crates of AKs and Chinese-built SAMs with deniability, fine by me. I'm in favor of Q's residence mysteriously being vaporized while he's in it, as we owe him payback several times over. But not at the cost of more pilots, aircrew, Soldiers, or Marines. Not for several more billions in operating costs followed by endless humanitarian aid paid for by increasingly worthless currency and debt leaving our citizens worse off in buying their food and paying their bills, while those we assist accuse us of war crimes, racism, and imperialism.


My family. My community. My nation. My priorities.
Posted by MauserMedic at 10:33 PM 3 comments: 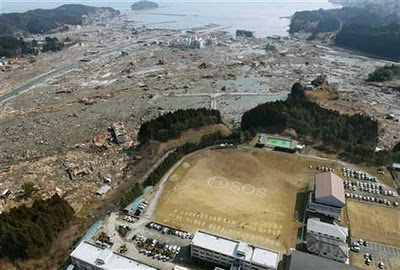 The post title is one of my current unit's cultural sayings. In context, it's generally used as a sham excuse by a select number of higher-ups who are sloughing tasks off to others below them. However, there are times and places where this literally becomes the truth, as much as people wish to believe otherwise.

Some quotes from news reports out of Japan:

"Millions of people spent a third night without water, food or heating in near-freezing temperatures along the devastated northeastern coast."

"People are surviving on little food and water. Things are simply not coming," said Hajime Sato, a government official in Iwate prefecture"

"We have repeatedly asked the government to help us, but the government is overwhelmed by the scale of damage and enormous demand for food and water"

"we simply don't have enough. We just did not expect such a thing to happen."

"I never imagined we would be in such a situation," Watanabe said. "I had a good life before. Now we have nothing"

All cringeworthy quotes. Which is why I have these personal rules:

1) Stockpile sealed food and water. Being foremost in the thoughts and prayers of other nations won't put food in your stomach for at least several days in the best of circumstances. Where I normally live, tsunamis aren't an issue, but flooding, tornadoes, and extreme winter conditions are. I will not survive the initial disaster only to starve in the aftermath. Furthermore, don't store it all in one place. Family, storage rental, or even a secret squirrel stash buried in the woods within a one day foot-travel distance can make the difference between between hoping someone feeds you before you starve versus being able to maintain your health and strength in an extreme situation. For these acute events, I'm a big fan of the lowly MRE, due to being able to consume it cold without added water if necessary (based on experience, hunger truly does make the best sauce). Having at least a week's worth of food and water for a household and extended local family is a must from my perspective.

"An emergency worker in white helmet came over and told him if the (gas) station opens at all, the gas may be allocated for emergency teams and essential government workers."

"large areas of the countryside remained surrounded by water and unreachable. Fuel stations were closed, though, at some, cars waited in lines hundreds of vehicles long"

2) I don't like to let my gas tanks fall below 50% full, and I keep enough fuel in my garage to top up that 50% if needed. Which is great, if you can actually leave the area to get to a relative's place that is agreed upon in advance. But otherwise, gasoline shouldn't be a priority. Why? Because if you run a generator in this situation, you're going to be a refugee and/or looter magnet. Which is why The Wife and I are focused on being able to live in an 1895 technology mode for an extended period of time. Modern fuels, such as Coleman fuel and propane, should absolutely be stocked for easier cooking and emergency short-term heating, because they are silent. But having plenty of aged wood on hand is good if things are going to be extended. Implied is having the means to use these fuels, and cookware (think iron) that is durable over open flame.

3) Even in advanced countries with benevolent governments, you can't count on them to get to you in a timely manner. Ever.

4) Japan is culturally homogeneous with a deep tradition of cooperation and group efforts. The US isn't. After an initial event, culturally diverse areas will experience what is essentially tribalism, with those outside of the local tribe being more at risk for violence of all types. Use resources discreetly, be helpful to your local area as much as safely possible, but be prepared physically (again, discretely, or depending on where you are, extremely discretely) and emotionally to use force in defense of your own and your local community's safety and resources.

5) The will to survive doesn't trump all, but it will take you further in an extreme situation than a passive mindset that waits for someone to take care of matters.

I strongly recommend checking out the Survival Blog website, especially his link "Getting Started" on the left side of the homepage.

Because in the end, we're responsible for ourselves.
Posted by MauserMedic at 10:53 PM 2 comments: 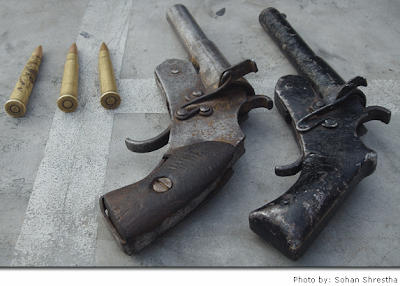 Handbombs. That's what these are.
Posted by MauserMedic at 9:11 AM 1 comment:

This Should Be Interesting

A Martini-Henry carbine I picked up in the bazaar at Camp Phoenix a couple months ago. This one was made by the Braendlin Armoury Co. in Birmingham, England. It's what appears to be called a "trade gun", in that it's not military issue, but available to volunteer units, or individuals who wished to purchase their own carbine in military furniture. Although at one time or another, one of the local vendors went to town with the faked stamps all over the metal. Which I'll post further pictures of in the near future.

But for the interesting part: Until 2009, antiques like this were simply allowed to be inspected by a US military customs unit, then allowed to be mailed if OK'd by them. Which, unfortunately, was apparently severely abused. Leading to the regional military command to restrict all antiques which fired center-fire and rimfire cartridges.

IF one gets a BATFE Form 6 (part II, for military personnel) approved, THEN one may send home the previously mentioned systems.

So. The form is filled, and I'll be getting some express envelopes at the post office hut next door tomorrow morning. I'm told it takes 4-6 to get the form back with a yea or nay. Let's see what happens.
Posted by MauserMedic at 8:23 AM No comments: 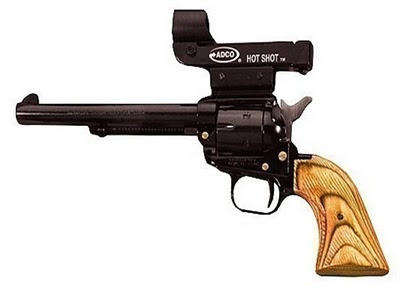 Born of the Traditions of the Old West, the Rough Rider maintains much of the look and feel of the legendary Single Action Army revolver, only in a scaled down version. Chambered for the .22 LR and .22 Magnum cartridges the Rough Rider is manufactured using state of the art precision machinery that assures its accuracy and reliability.

Somehow, if that's your selling point, throwing an electronic sight on top of it rather defeats the purpose, no?

As an aside, I once owned one of these (sans noted sight arrangment). It was inexpensive, and neither great nor awful in the accuracy, trigger, and speed departments. But it was rather fun for ventilating tin cans while making a couple boxes of .22 rimfire last a bit longer.
Posted by MauserMedic at 9:12 AM 4 comments: 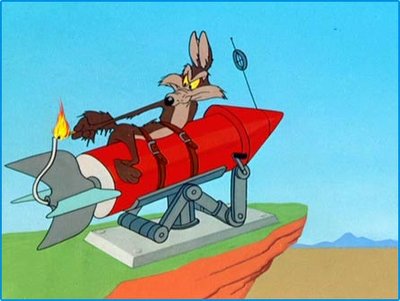 If you're going to drop a rocket on the air field while I'm shaving, I'm not playing anymore. Your aim sucks, and your rockets are second-rate pieces of shit. Bite me.
Posted by MauserMedic at 9:19 AM 2 comments: