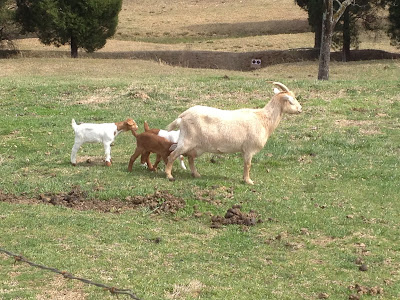 Got an invitation from a neighbor to try out his new .44 lever action and reloads, as well as his father's Winchester Model 94 that he'd found when his father passed, and just got around to loading up cast rounds for.

Shooting other people's guns? Hell yes, I'm up for that.

Of course, courtesy demands I bring toys to share, so an AR and S&W Highway Patrolman went into the truck for the trip to the family acreage. Shooting is informal compared to my local range. The backstop is the far bank of the creek, 150 yards from the well pump house, which also serves as the shooting rest. Which leads to less than ideal sighting in with a new never-rifle using an 8-inch shoot-n-see target on a piece of 2x2 cardboard with a couple hundred bullet holes in it.

So what does one do when tired of shooting a small target with poor feedback? Horse shit. Stands out great against yellow and green grass, misses are easily seen by the chunks of dirt flying in the air, and hits are, well, very easily seen as the material flies better than the dirt does. Revolvers at 100+ yards keep it interesting.But there are things more engaging blasting horse apples at long distances. Like having a copperhead pop up while crossing the creek recovering targets at the end of the day.

Two men emptying revolvers into water a couple feet away, without prior planning or coordination, is very interesting indeed.
Posted by MauserMedic at 6:27 PM 3 comments: 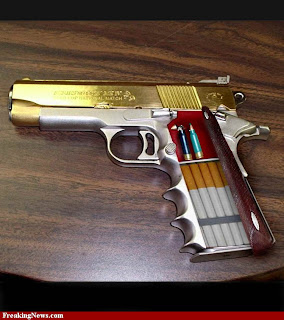