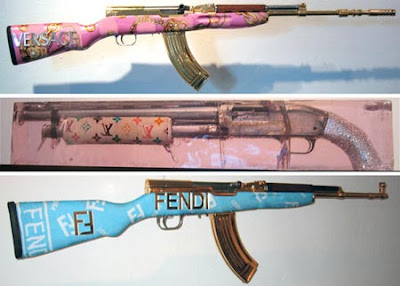 I inadvertantly ran across these while doing an image search on tuberculosis. Go figure. Anyway, head on over here to enjoy more proof that more money doesn't necessarily equate with better taste. H/t to Geekologie.
Posted by MauserMedic at 1:00 AM 1 comment:

Some Animals Are More Equal Than Others 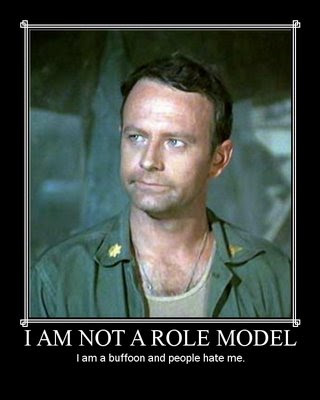 Specialist MM is manning the desk of the medical clinic, filling in for the duty medics while they take their break from weekend duty. All is quiet & dull, exact as Specialist MM prefers. Suddenly, the duty phone rings:

SMM: Troop Medical Clinic, Specialist MM, How may I help you?

Agitated anonymous caller: Were you there when Colonel X came in?

SMM: No Sir, I came on duty at 1600, and no officers have come into the clinic while I've been on duty.

AAC: Well find out who was!

Realization that Dr/Col. Shoot From The Lip is the agitated individual on the other end of the line dawns, based on familiar annoying tone of demands.

SMM: Sir, the duty medics are on their break and out of the clinic. I can't find out right now, I'm the only medic in the clinic.

SFL: I don't care! Find out! Col. X came into the clinic for a Type I tummy pill, and the medic only gave him one!

SMM: Yes sir, that is the clinic policy (formulated by the Officer In Charge of the clinic, who, wonder of wonders, is also a physician) for the Type I tummy pill.

SFL: That's a stupid policy! You guys need to start thinking down there! The Colonel is very upset!

SFL: And find out who is responsible! (abruptly hangs up).

SMM sits a moment to allow his blood pressure to drop back down to levels that will not induce brain aneurysms, while reflecting how the army would greatly benefit from making medical officers serve at least four years as an infantry officer before being allowed to attend medical school on the governments dime, where they would hopefully learn something about the concepts of personal leadership, integrity, and respect/concern for those under your command, rather than hustling for promotion points while perfecting an airtight liplock on a superior's ass.

Some poor medic is going to get his or her ass reamed because they followed a policy set up by the officers. The officers just didn't bother to explain that the policy only applies to people who aren't officers. Then again, if we were smart enough to know that on our own, we probably wouldn't be enlisted.
Posted by MauserMedic at 11:00 AM 2 comments:

"Big" Is A Relative Term 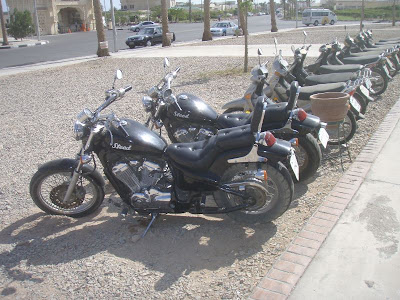 Spotted these outside of a dive shop in Sharm el Sheik, who rents them for tourists. The scooters are everywhere in Sharm. Actual motorcycles are few and far between, so I had to stop and look, which brought over one of the staff:
"You like? Very big machine. Very powerful."

Yes indeed, a beastly 650cc of pure power, I note taking a look at the engine.

"Yes, it's a big motorcycle"

A brief look of do you really expect me to believe that crap?, then a quick salesman's smile: "Yes, that is a very big motorcycle".

"My wife rides an 1100cc", which gets me a look of how stupid do you think I am that a woman would ride a motorcycle, let alone one of such stupendous size.

Which I may well do the next time a get down that way. A 650 is a damn sight better than nothing, although the way people drive over here, I'll have to elevate my normal riding paranoia by a factor of 10.


Posted by MauserMedic at 8:03 PM No comments:

I only know what it is because it was posted on the wall of the mess hall (I'm old; it'll always be a mess hall to me, not a "DFAC"). 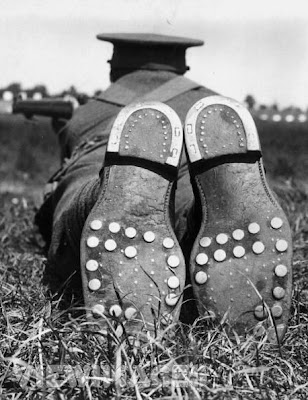 Things that suck about multinational deployments:

Not being on the standard US Army supply chain;

Not getting hot weather boots on activation, 'cause your size is backordered.

Deploying to the desert in Gore-Tex insulated boots, 'cause they're the only tan boots you have on hand that fit.

Tasking your spouse with digging through footlockers of recently deauthorized uniform items in an the attic looking for the the boots you wore through the last half of your tour in Iraq, so you have something on your feet that other people can't smell after a month in the desert, while waiting for your backordered boots to show.

Giving up on the backordered boots, because your Iraq boots' soles look like they've been run over by a lawnmower after two months of walking on the gravel all over the post.

Spending $120.00 on hot-weather boots you should have been issued five months ago.

Having new boots arrive and realize that manufacturer B's size 11 is a full size larger than manufacturer A's size 11 boot you've been wearing, resulting in the abilility to shift your feet sideways inside the boot when laced as tightly as possible.

I hate long-distance shoe shopping.
Posted by MauserMedic at 11:32 AM No comments: 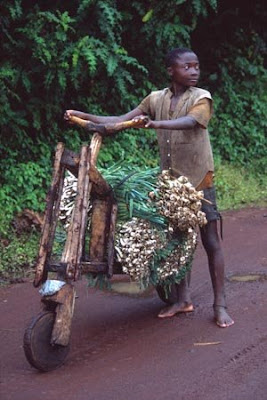 From: fredtom
Subject: GOOD DAY TO YOU PLEASE,


I don't think there even is a Patriot Guard chapter in Sierra Leone.
Posted by MauserMedic at 3:41 AM No comments: 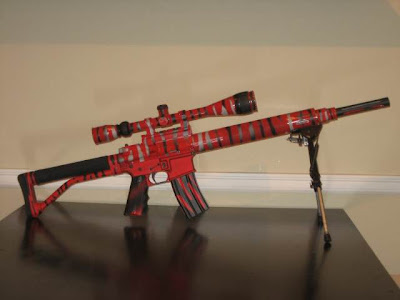 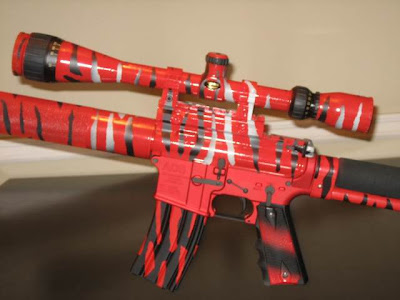 Dear God, man, if this is your pride and joy I'd hate to see what you consider ugly. But it certainly is one of a kind.

"I personally applied the custom Tiger Stripe Duracoat scheme which is what really seperates (sic) this rifle from all others."

I agree, the rifle does indeed stand out from all the others. I've never seen a rifle that appears to have been finished in Revlon's "Hooker Red" nail polish.

"I receive nothing but praise from everyone who sees it."

This tells me that either you're the only one who's seen this prior to it being posted for sale, or your associates are masters at poker.

"This rifle is not for your average shooter, it takes a real AR-15 fan to appreciate this the paint/craftsmanship in this package...."

It's certainly not, and you've probably managed to offend or amuse 99% of the people in AR-15 community.

Thank you. It's been an awful week, and I can't remember that last time I've laughed this hard.
Posted by MauserMedic at 11:15 PM 1 comment:

This was a run was to familiarize us with the route to the Beer Sheva hospital, so that we aren't getting lost when we have to do this in an ambulance at night. 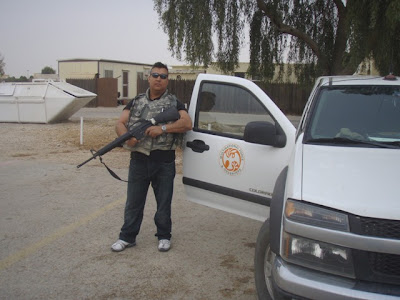 My partner for the day, SGT M. This is how we are required to dress anytime we're enroute to Israel as long as we're on the Egyptian side of the border. 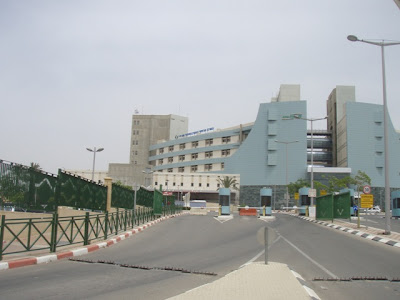 Coming up the entrance to the Beer Sheva medical center. Note the spike strips in the foreground, high fences, and security guard booths with steel traffic gates. Each individual coming in is questioned and inspected. This includes hand-held and walk-through metal detectors. They take bomb and firearms threats seriously here. 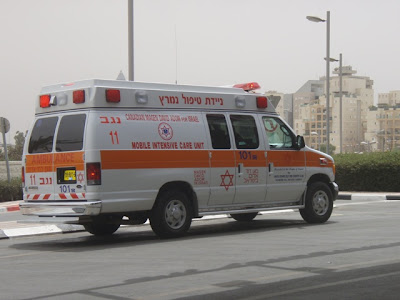 The common Israeli ambulance. I've yet to see any of the Type I or IIIs in Israel. The patients are unloaded out in front of the hospital, and wheeled in through the same ER entrance as walk-in patients. There seems to be much less concern with privacy here than in the US. 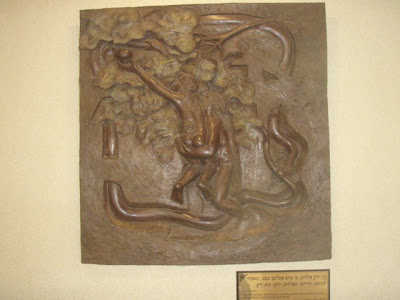 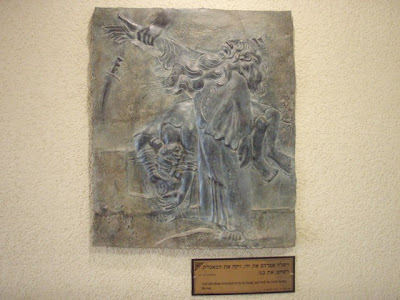 Photos above: Inside the hospital, some rather interesting biblical artwork. 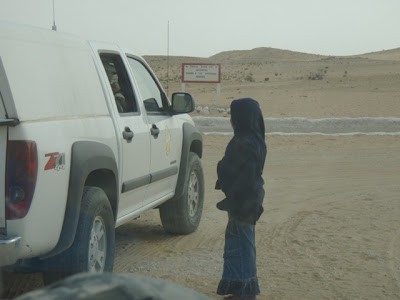 One of the village girls who lives next to the border checkpoint. Kids will frequently try to get handouts from MFO vehicles. 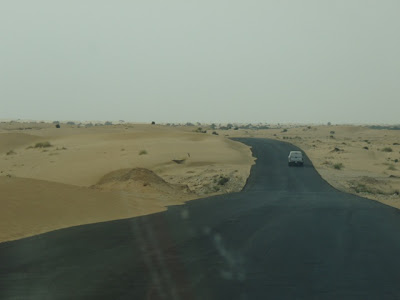 Back in the Sinai, heading to North Camp.

Posted by MauserMedic at 4:04 AM No comments:

Posted by MauserMedic at 12:36 PM No comments: 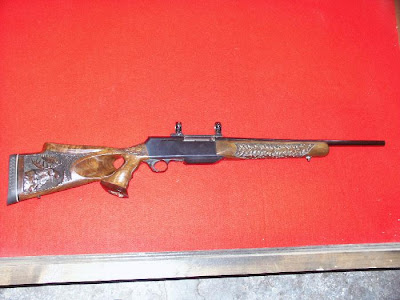 There's a lot I'd like to say about this, but the chicken shwarma I bought on the local economy has come back to haunt me, and I can't stay in one place long enough to type it all out. Have at it... 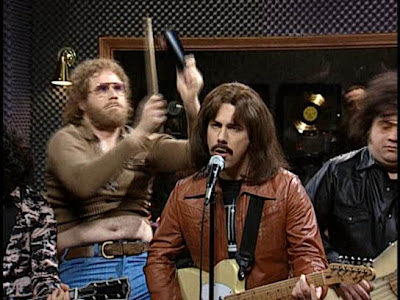 Should a barracks-mate down the hall receive a brand-new X-Box with a brand-new Guitar Hero game in it, and should he happen to be playing "Don't Fear The Reaper" while doing a fine imitation of the drone pipe on the bagpipes while accompanying himself, the standard-issue canteen cup will provide superior ability to penetrate his closed door while accompanying him on the field-expedient cowbell.
Also, I've just surpassed my personal record for the use of hyphens in one post.
And, Jim Beam Black will substitute for Jack Daniel's in a pinch. 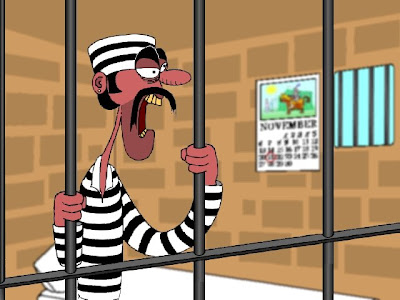 and I'm on clinic duty for the next 48 hours. But it's not like I'm here all by myself; I've got the Veterinary Medicine Staff Sergeant with me. If we have to euthanize anyone, he's got plenty of experience. Unfortunately, I get to see all other problems. Except the jock itch guy. I don't call in doctors for groin fungus. But since only the docs can prescribe anti-fungal cream (yes, it is that stupid here) my advice to him was go back to your room, open a window, find a comfortable chair, and get some sun to the affected area. If I hear about a pervert getting arrested for exposing himself to passers-by later today, I'll know he took my advice. You get what you pay for, and I give advice for free.

Posted by MauserMedic at 2:42 AM 2 comments:

Turning A Silk Purse Into A Sow's Ear

What you see above used to be a Yugoslavian M48 Mauser, essentially a version of the well-known K98, leaving aside the finer details of Mauser variants. M48s, while not really having much history, despite Mitchell's Mausers creative advertising, did have several characteristics endearing them to their owners. Beyond the expected Mauser simplicity and ruggedness, most display a high degree of craftsmanship, although not to the degree of early contract Mausers, in fit and finish. Wood is generally of high quality, with warm tones, and unexpected density for stocks that aren't laminate. Finish was still generally deep and rich, and metal to wood inletting showed individual attention detail. Most owners I've spoken with have been happy with the accuracy, generally using old 1950s surplus ammuntion. Below is an unaltered M48:

Sad to say, whoever slapped that stock on there lost all the simple, elegant lines of the original. Perhaps it's more accurate now, if the new stock provides for pillar bedding, and the scope is reliable. But it's not always about getting the smallest groups no matter what; sometimes it's about getting the best you can with what the system is, and enjoying the ride along the way.