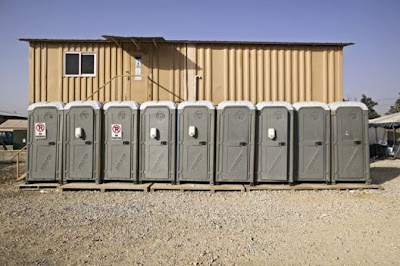 A snapshot of various people's perceptions about Bagram. If you're easily offended by vulgar humor, you may want to pass on it:

Why I love Bagram.
Posted by MauserMedic at 1:24 PM 1 comment: 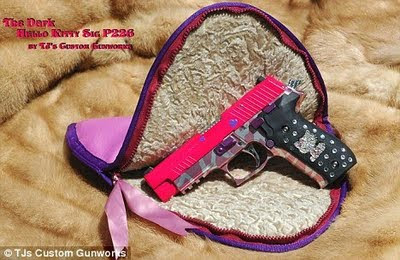 And a big thank you for the contribution by Papa Whiskey on this one. This is surely in the top percentile for..........hell, "bad taste" doesn't even begin to cover it.
Posted by MauserMedic at 2:43 PM 6 comments: 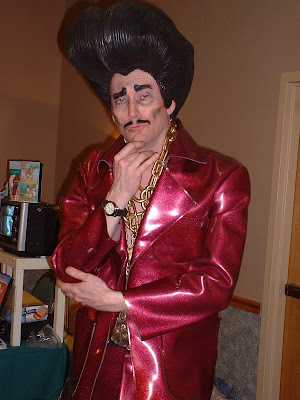 I had headcount duty for midnight chow last night. Had this guy's Afghan cousin come through the line; same hair, just on a smaller scale. Same mustache. It was more disturbing than seeing the ANA guys that look like Taliban recruiters. Shocking, even. Who expects to see an Afghan in the boonies doing a stone-cold imitation of a 1950's low-class mafia hood?

Posted by MauserMedic at 4:53 PM No comments: 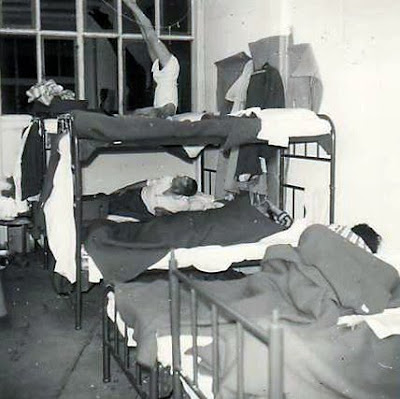 Working hours here aren't much like those in the states. There's no labor law awarding overtime or comp time when the work week exceeds 40 hours, and if someone in the military is working only 40 hours a week here.........they're not really working. Regardless, there is down or free time here and there, which people take advantage of in different ways. Gym rats head to the workout tent, gamers to their consoles, caffeine addicts find a Green Bean or gather around a coffee pot to try their latest variation received from home, and the cigar afficianados gather in dark and secretive lairs to avoid the glares of the health nuts. Or, some people shop at the two "bazaars" on post: 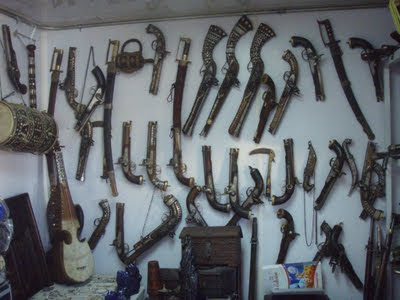 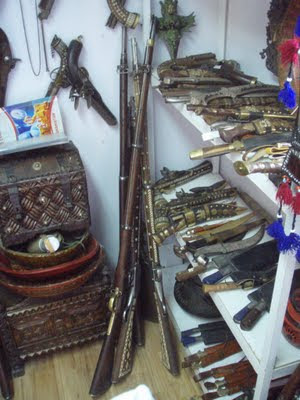 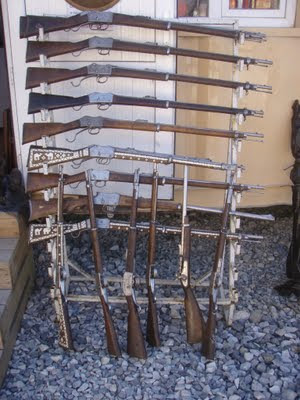 Posted by MauserMedic at 5:41 AM 2 comments: 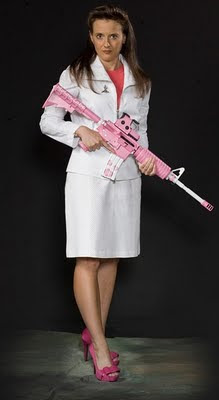 Easter is coming, be sure to get your AR in seasonal colors!

A side note- Yes, I know who she is; no, I'm not making fun of her; yes, I like what she's saying about religious tolerance on the opposition's part; if anyone acts on the death threat (soon to be plural, no doubt) made against her, I would like nothing better than to see a jihadi laid out by her and that rifle.

That's still an ugly rifle.
Posted by MauserMedic at 11:13 AM No comments:

A Martini-Henry carbine made by the Braendlin Company of Birmingham, England. This was found in a shop on Camp Phoenix in Kabul shortly after arriving in Afghanistan. These shops are full of Pakistani copies, most of which an experienced vintage collector will recognize out of hand simply by the quality of fit and finish on the part. Heavy grinder marks on all the metal tends to be one of the signature tells. There are some pieces that are very well done though, and require a shopper to know not only the proper markings, but the correct locations, sizes, and orientation of those marks.

One of first clues this was a truly vintage rifle is fit and finish: the wood, although well-used, has excellent fit to the metal; another is the lack of grind marks, and the fine atttention to detail of the metal to metal fit between the stock and barrel near the muzzle.

Another is the crossed pennants on top of the hexagonal rearmost portion of the barrel. Braendlins are worth less than rifles made by the Royal Armouries, and this commercial or "trade" marking adds no value to the piece as a counterfeit. As an aside, it's evident this piece apparently and an ejection issue at one time, as someone has seen fit to seriously beat the feed ramp portion of the breech block. 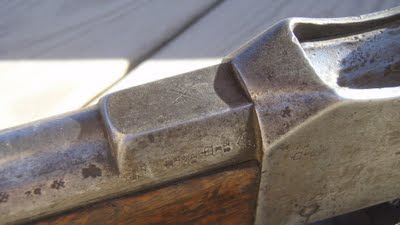 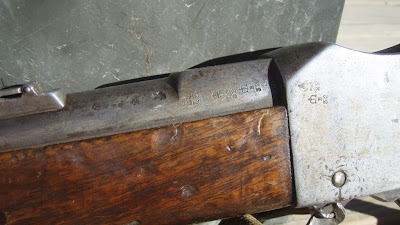 Local merchants being what they are, there has been an attempt to present this rifle as something it isn't. Forged markings are seen to the left of the pennants, and on the left forward portion of the receiver, along with original correct manufacturer markings seen on the round portion of the barrel, as seen in the two images above. 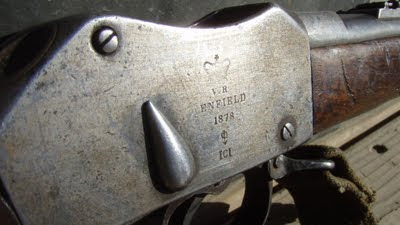 And on the opposite side, a very large set of forged markings, designed to get the novice collector or souvenir collector to part with his cash. 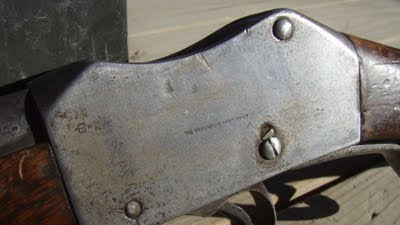 And a definitive stamp; the manufacturer's trade stamp on the left receiver of the rifle. A very small, fine font with excellent linear character placement, which is difficult for the local gunmakers to duplicate. Again, this stamp actually lessens the value relative to a true military carbine, so this is also little incentive to duplicate it. Additionally, I have not been able to find any sources which note that British government accepted arms had this manufacturer's mark on the receiver in addition to governmental markings. Now, if the ATF would be so kind as to approve my import papers the military customs folks want before I can ship it home........
Posted by MauserMedic at 9:59 AM 2 comments: 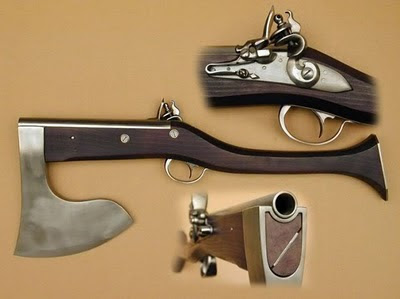 Welcome to the Office 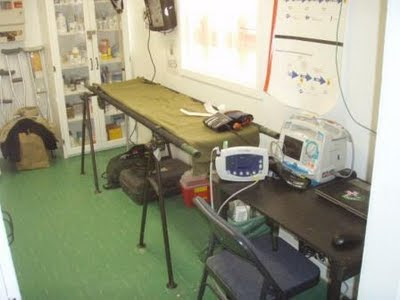 Ok, since I’m back around internet (almost as good as dial up), we’ll do a little catching up on all things medical REMF. Starting with medical facilities. One of the things a lot of young troops or those deployed for the first find surprising is the level of care available here. As in, this isn’t your family doctor’s office. We can handle trauma quite well enough to get someone to a surgical facility as needed; we’ve some of the finest airlift capacity in the world.

If you need labs or x-ray, you’re going to do some traveling. Either across post, or across country, depending on your location. Need an MRI? You’re going out of the country, or not getting one. Manage diabetes? Goodbye Afghanistan, hello Germany, and get ready to be a civilian again. And privacy, here, means we’ll try to not let anyone walk into the cubicle while your pants are around your ankles to the best of our ability.

So what does your typical REMF medic see on an average day? As most would anticipate, there's lots of sports, training, and work-related injuries such as sprains, strains, cuts, and bruises. And given our environment, plenty of stomach and bowel complaints. Then there's the stuff that's less pleasant: the warts (in lots of places, some of them not so enjoyable to work around), fungal infections, hemmerhoids, scabies, and just plain poor hygiene related problems.

Makes me appreciate how outstanding our normal healthcare standards are at home; I hope it makes the same impression on our younger troops who’ve never been exposed to anything else.
Posted by MauserMedic at 11:25 PM 5 comments: (local village, with a wonderful view for watching us watching them)

A new moon rising, clear sky full of stars, and a gentle breeze wafting the delicate aroma of concentrated portajohn contents to the temporary quarters; just another lovely evening on the FOB. On the upside, a two-hour conversation with a former Captain in the Bosnian army on his experiences in the war, the change in values of both people and commodities during such, and his views on religion, culture, and international relations while waiting for a transport helicopter to arrive.
Posted by MauserMedic at 7:36 AM 6 comments:

Regarding The Current Religious Unpleasantness 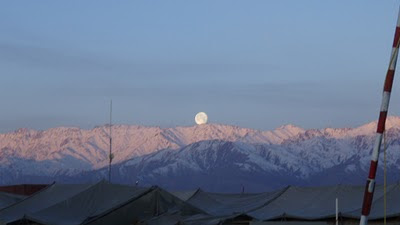 On the small FOB I'm on, there's probably at least fifty locals at minimum doing various tasks. To date, I've not seen anyone get their jihad on. But then again, we all walk around with weapons. An armed society......... I have heard of some protests out on the roadways, but my impression is that most people getting agitated are just that: getting agitated by some local shit-stirrer looking for a step up in the local jihadi/extremist power structure. Most locals around here a looking to keep the larder stocked more than anything else. Not that most of them have any love for us. Which, as an aside, young males full of testosterone and lacking an appreciation of things outside of aggression, booze, and sex don't make for winning ambassadors in general. Not that that is something new.
Posted by MauserMedic at 11:25 PM No comments: 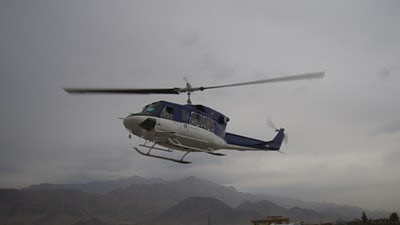 I've been on the move lately, and haven't had access to the site. More than likely, I'll be on the move again for several more days. Sorry for the interruption in Sunday postings, but sometimes there just aren't services available for the fun stuff.

Noted above, one of the local transports flying one of my current squad members out to a FOB. I have weakness for Hueys, even the civilian ones. And yes, I mangled the image for security purposes :)
Posted by MauserMedic at 9:47 AM 2 comments: