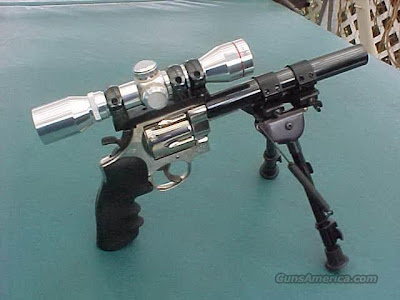 "We are offering for sale a very nice Smith and Wesson Model 29-2 revolver in .44 Magnum with original 4" barrel and custom bull barrel 7.5" with bipod, type that extends, simmons pistol scope 4X32, original rear sight, Hogue grips, 7 speed loaders and case. This is a great deal the bull tarrel is beefy and with the bipod dead accurate for bench or hunting shooting, The original barrel looks to have maybe one round fired through it and the bull maybe a box. The scope is nice and clear and set for far away sighting. The value of this package is over $2000 so don't let it get away from you. Actual piece is pictured."

Clearly, value is in the eye of the beholder. I've yet to think of a situation in which a bipod on a pistol is of use in hunting, unless you happen to have built a bench on the end of a beanfield for knocking off deer; then again, perhaps the owner just just thought prone prairiedog shooting with a .44 Magnum would be the next big thing.
Posted by MauserMedic at 11:07 AM 5 comments: 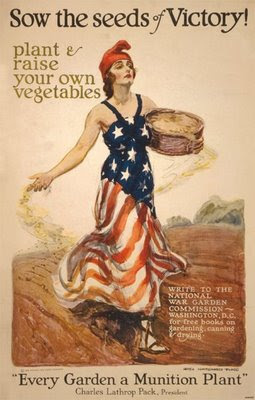 I've gotten up early to attend five hours of radiographic continuing education, returned home to construct raised garden beds out of landscape timbers, unloaded and dumped half a pickup bed of compost by hand, loaded twenty bags of pea gravel into the truck also by hand,and read sixty pages of my Information Systems textbook. I think I've had enough relaxation for one day.
Posted by MauserMedic at 9:07 PM No comments: 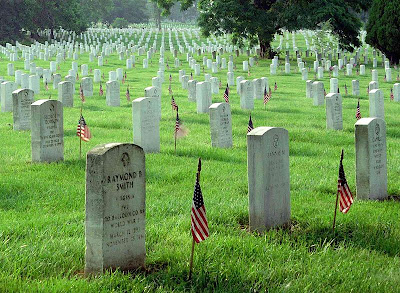 There's not much one can say that hasn't been said long before:

Greater love hath no man than this, that a man lay down his life for his friends. 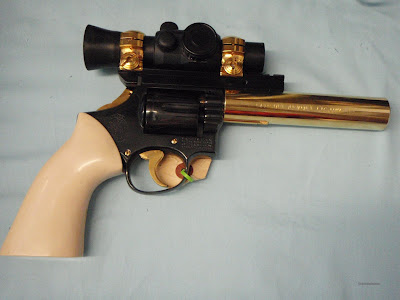 I simply don't know where to begin.........although at this level of taste, I'm surprised there's not a stripper engraved carved injection-molded into the grips.
Posted by MauserMedic at 8:24 AM 5 comments: 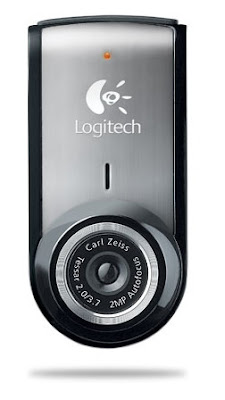 After the wife has had to steam-clean an area of our living room at least three times, plus paying a professional service enough money to buy some nice boxes of premium pistol ammo, I had to practice serious restraint not to strangle at least one dog tonight, having been left a steaming gift behind the couch tonight. While I was in the house, and the dog door was open for use. Funny, the dogs didn't have any problem finding the dog door a few seconds after I found that steaming pile of turd.

But, being the benificent tyrant of house canids that I am, I refrained from going out in the yard and converting the one I'm pretty sure did it (how, you may ask, out of three dogs, could I know? A lot of time in the yard with a scoop, that's how) into a some kind of leather product. Instead, I merely converted an old webcam into a dog poop surveillance system behind my couch.

Truly, I am a genius...or a freak, depending if you go by The Wife's expression upon seeing my accomplishment. At least now, through the power of B.F. Skinner's behavioral principles, I'll know which dog to brainwash until I get this: 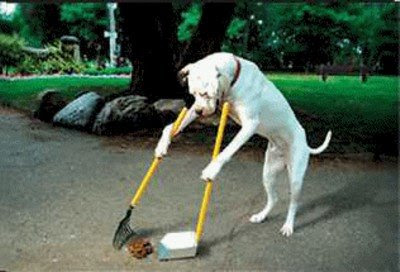 Posted by MauserMedic at 8:03 PM 4 comments: 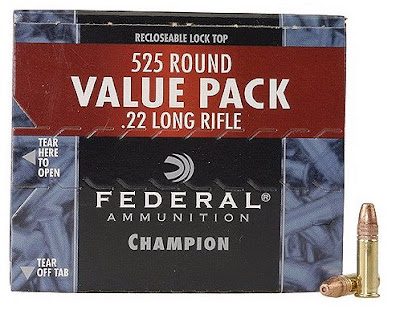 Two boxes, found while wandering Wal-Mart looking for other stuff. Time to start pulling out the .22s!
Posted by MauserMedic at 8:17 PM 3 comments:

Better late than never; between school, a rare opportunity to shoot, and this; this came last. Anyhoo.....

Another fine Soviet design, apparently based upon the available low-skill, low-motivation labor force availabe, and with New Soviet Man ergonomics: a combination grip/magazine well canted opposite to the natural shape of the hand, combined with a thumbhole stock placed well behind the thumbs reach. As an additional benefit, a sighting system radius comparable to those found on longer barrelled pistols, just to notch down the accuracy even more than the loose tolerances ensure. Not much a surprise this one didn't become standard issue.
Posted by MauserMedic at 7:59 PM 2 comments: 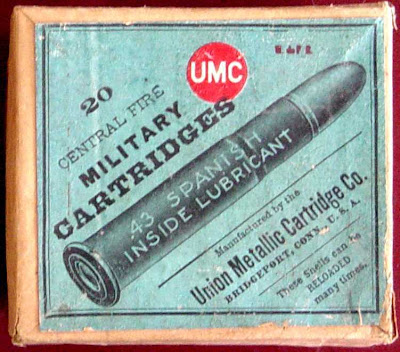 Loaded some up tonight; classwork and weather allowing tomorrow........
Posted by MauserMedic at 11:26 PM No comments: 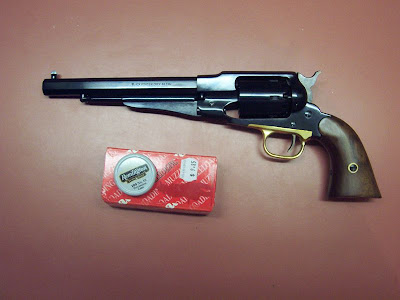 and plenty of fun!

Finally got out shooting yesterday, although not the 7.62 x 51 I was planning on. Given the scarcity of ammunition, I feel more comfortable just holding on to my recent find. But, as I got out of work early yesterday, and it was sunny out, I needed to find something to shoot. Fumbling about in the arms lockers, I looked for something interesting, recreational, and most of all, reasonably easy to restock ammunition I'd burn up. Which led me to the reproduction 1858 Remington, a gift from The Wife years ago (The Wife has outstanding taste in gifts). So far, there hasn't been much of a run on cap and ball components, although one reader has noted Midway ran out of percussion caps recently. But, thirty rounds lasts well over an hour with this gun, while I'd burn up that in ten minutes of leisurely shooting with my modern revolvers.

It was enjoyable just shooting for pure relaxation, with the old single-hand target stance, rather than modern holds. For anyone who would have seen it, there was an interesting contrast: while I slowly shot and reloaded, leaving substantial clouds of smoke for every round fired, a young man in tactical gear several yards to my right practiced his tactical reloads and weapons transitions with his M4 carbine and Glock. I'm pretty sure he burned up a lot more money than I did, although he seemed to be enjoying himself as much as I was. And probably enjoyed cleaning far more than I did at the end of the day, although a bottle of Smithwick's Ale made the task a little less onerous.

Keeping with the theme of Remington and blackpowder, I think I'll whip up a batch of blackpowder cartridges for another vintage gun, although this one isn't a reproduction, but a (mostly) original. A little something to look forward to for the next sunny day I can sneak away from responsibilities.

But now; time to go do the first of several days worth of post-shooting/cleaning rust checks.
Posted by MauserMedic at 4:56 PM 4 comments: 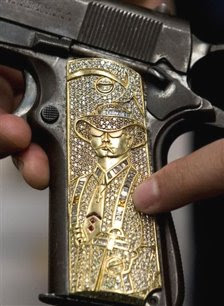 A plethora of pimp guns confiscated from Mexican drug lords. Doubtless bought in the US as a strawman purchases....because as we all know, those redneck crackers on our side of the Mexican border loves them some gold plate finish and crappy art grips; the drug lords just have to take what they can get across the border with their meager narco-dollars.

H/T to Tam at View from the Porch, who found it here.
Posted by MauserMedic at 8:00 AM 5 comments: 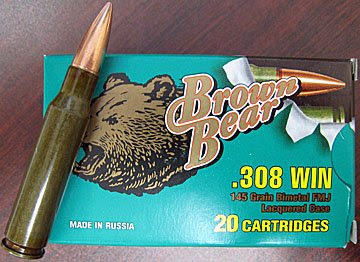 300 rounds of 7.62x51 picked up from the delivery office today, which made me pretty happy. Not making me so happy was riding in the unexpected and cold downpour without rain gear (nice planning on my part) and finding my glasses mangled in my jacket pocket from apparently smashing them against the pick-up counter when I signed for the package.

But as I dried out, and un-mangled my frames, I figure I've come out ahead. Might have to break out some of the Israeli Mausers in 7.62 in the near future....
Posted by MauserMedic at 8:50 PM 2 comments: 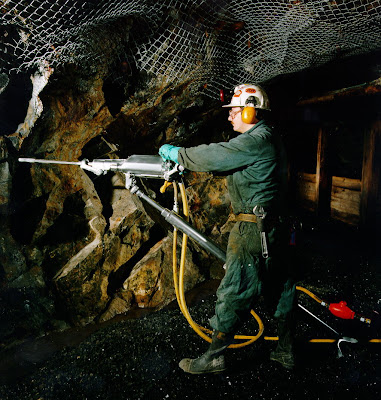 Being proud of being hospitalized for only the third time in nearly 80 years is indeed something to be proud of. However, showing some discretion about why you were hospitalized can be a good thing. Especially when "getting my butt reamed out for piles" is number two on your list.

Thank You
Posted by MauserMedic at 4:33 PM No comments:

We Wants It, We Do 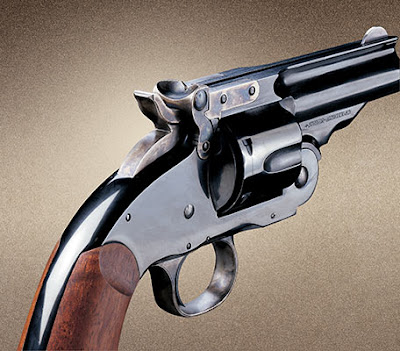 Having a little time at lunch during drill yesterday, I slipped off to check one of my favorite mil-surp haunts for the last twenty-three years. Where I finally found bricks of standard velocity .22 rimfire, currently unavailable in my home town. When I informed the clerk I would like three, he assumed I meant boxes, and was surprised when I told him I meant bricks. Apparently they do things on a small scale here these days.

But more exciting, and disappointing at the same time, was finally running across an Uberti reproduction Schofield at another local shop. Although this one primarily markets outdoor products marketed to the local granola munchers, the profits support the real interest of the owners: the shooting section. This tends strongly towards shotguns, being in the Midwest, and plastic/stainless pistols, modern tastes being what they are, but I still occasionally find something of interest. I've lusted after the repro Schofields since the first time I saw one in American Rifleman, and would damn near rob a convenience store to get money for a copy of the Russian Model in the correct caliber. Although this one was a different variant, it was still a beautiful copy in blued steel and warm wooden grips well worth having. But an $840.00 out the door, it's still to steep for me. Perhaps next May when the taxes come back, if Dear Leader is feeling generous, I'll have some tax returns to apply towards it.
Posted by MauserMedic at 8:29 AM 1 comment: 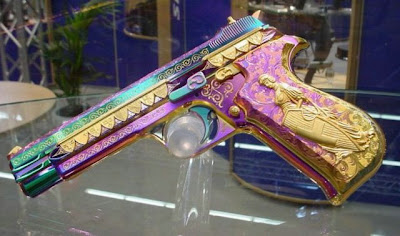 Is there supposed to be some symbolism to this, or did someone just have a thing for the colors usually found in a gasoline slick on water?
Posted by MauserMedic at 4:08 AM 3 comments: 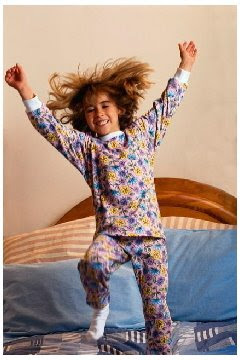 Note to co-residents of the hotel.

I hate you and your children. All of you have the social graces achieved via the "Lord of the Flies" finishing school. Were it not for our current society's fascination with making sure absolutely no one is offended through the mechanism of prosecuting anyone enforcing reasonable standards of behavior, I would gladly smack the crap out of your obnoxious little whelps frenetically running laps in the hallway, with a complimentary swift kick in the jumblies for you to prevent the future reoccurence of reproduction.

It is my sincere hope your children are as much of joy to you the rest of your life as they have been to me this evening.
Posted by MauserMedic at 7:57 PM 1 comment: