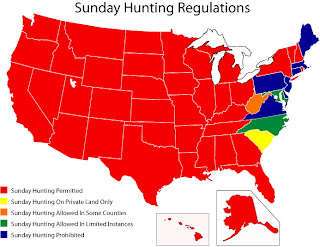 I just inadvertently learned from the Charlotte Television News that there is a bill to allow hunting on Sunday.

I didn't know there were any states that didn't have Sunday hunting. This chance catch of a bit of news probably just saved me from wondering where everybody is right before an unpleasant conversation with the local version of the DNR next year (no time for hunting this year, and having one's hunting tools in another state doesn't help either).

The interview with a local pastor had him give a short speech on why there shouldn't be hunting on Sunday which can be condensed down to "you should be in church, it's a day of worship".

If you need to legislate hunting out of the picture to get men in your church, I suggest you look to your skills as a religious leader.

As for non-religious me, the firing range is my church, and I'm willing to bet money that a fair number of devout Christian hunters feel closer to God in the woods than seated in a pew.

Guess I'll be polishing the handgun skills on Sundays next fall.
Posted by MauserMedic at 7:54 PM