Hoplophobes of the World 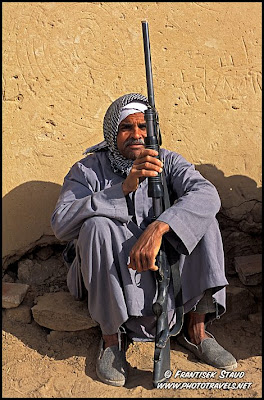 Europe, I'd expect it. The U.S., I wouldn't be suprised. But the Middle East?

My local IT guy, a young Egyptian man, probably not yet in his twenties, is trying to troubleshoot my desktop PC for an irritating, but ultimately minor problem. A big thanks to Captain Micromanager for making sure four hours were spent on a problem than affects me once a day for a minute.

Since IT guy needed to have everything closed, I went ahead and logged out so he could log in. At which point the desktop image is visible. A nice photo of an IMI Desert Eagle in .50 cal with matching knife. As he's staring at it, I mention it's on my Christmas wish list. Which leads to a discussion on differences in gun laws in Egypt and the U.S. There was a bit of confusion over the concept of having both Federal and State laws, vs one national law in Egypt. Also, the thought that anyone in the U.S. can buy any kind of gun whenever and wherever they want. Whereas in Egypt, the law is one that is simple and unfortunately familiar to me. As it was explained,

In Egypt, you may only have a gun if you can prove your life is
threatened; people like movie stars, government employees, rich
people.

Sounds like California to me. Then, I could have sworn I was talking to someone HCI.

Of course, it's better to make sure no one has guns. That way the crime is
lower. I mean, even if someone isn't a criminal, they could still go crazy, you
know?

Halfway across the world and it's like listening to the evening news back at home. Yech.

"I mean, even if someone isn't a criminal, they could still go crazy, you know?"

Except that in that part of the world, you have to worry more about some crazy with a bomb rather than just a gun.