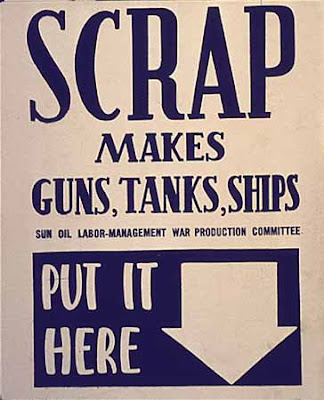 I've developed a reputation within my Guard unit for an unusual familiarity with guns. Often, this results in requests to look at something Grandpa stuck in the closet thirty years ago, or where that weed wacker that used to be a bayonet came from. Sometimes, I've been able to help people find out that old rifle they've kept in the closet is an original Sharps, is worth quite a bit more then the $300-$400 dollars they thought an "old gun" might be worth. Which I enjoy helping with, although wishing they would have said they had a gun they want to get rid of, and would I like to take it off their hands? Usually I end up telling someone that it's a common shotgun marketed through Sears in the '70s, or a mass produced German .22 revolver they might get $80 for at a gunshow. And sometimes, I get a message forwarded to me in my email like this:

These are the pictures you requested. My two younger brothers got them down from the attic in Mark's shed just for pictures and then put them right back. I thought that was really nice of them. Dad said that the muzzle loader was
handmade in Czechoslovakia. There is a part where the barrel wore through and
they patched it with lead. I hope your friend can see enough to appreciate them.

You can tell things are going downhill on the value of these guns even before opening the images. 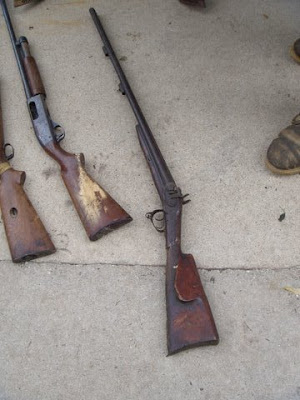 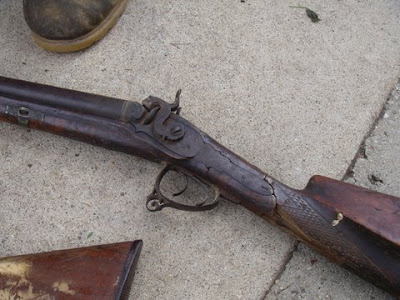 A neighbor of mine has a wife who hates guns. She had decreed that all the guns had to go and like a true friend... I was there for him. ;-)

I traded some stuff I had for his dad's old T99 Arisaka (with mum, mono pod, dust cover, cleaning rod and anti-aircraft sights) and an all matching Kar98a 1916 Erfurt. The 98a, was unfortunately bubba-ized (handguard gone, cut stock, etc) but the T99 is peach.

As it turns out, he also had a couple of muskets that make the one in the picture look mint. These poor things are good only for tomato stakes now. So sad. They must have been someone's pride and joy once.

This is how to make a grown man cry...

Former girlfriend once decided to show me "Dad's gun" while I was visiting. Was an old Remington .22 bolt rifle; nothing special of itself, but her dad's old rifle. Rusty patches on the barrel and receiver, and when I offered to find some suitable oil and clean it got an odd look like "Why?" She didn't like guns, so despite it being her fathers', she couldn't be bothered.