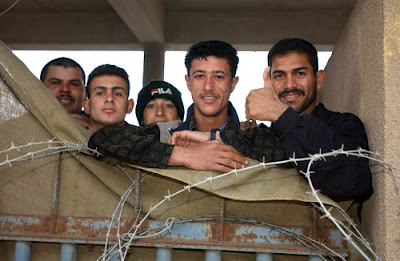 Watching the campaign throught the european outlet for CNN on our base television network, I'm seeing and hearing things that remind me of Iraq. When I was there in '03-'04, we had a fair bit of contact with Iraqi citizens. They worked on the bases, had various small shops on post, and we could talk to them while stopping in Mosul and Baghdad. What's the similarity to our people?
Expectations. One evil leader was gone. Soon, the all-powerful Americans would make everything right. Water, power, jobs; it would all appear soon. Everybody knew that. Except the Americans who were there. We were looking around having a hard time believing Iraq was functional at all, given the collapsed infrastructure. I'm not talking about wrecked by bombs. I'm talking about neglect. Just letting things fall apart. Goats eating garbage in the streets. Buckets of sewage thrown out into the road. But we were expected to turn it into a modern state in six months and leave. 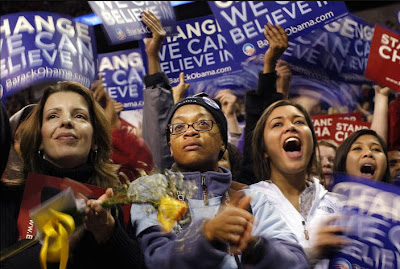 Now the expectations here. An evil, war-mongering, racist leader soon to be gone, and his twin soon to be defeated at the polls. The cleanest water in the world, all at the lowest prices and as much as you want. Cheap, clean power from the wind and the sun, the evil oil companies made to pay for their rape of the environment and consumers. Jobs for everybody who wants one, except those that will still be denied jobs they deserve, because those advertising them are racist/hateful/ignorant/demanding you be qualified to get it; for those unfortunate few, we must spread the wealth so everyone can have a little success. It will all appear soon. Because we'll have somebody new, and he says he'll make it all happen.

A lot of Iraqis are still waiting for the magic to happen, although there's quite a few who got up off their ass and started businesses. They're the ones that were putting satellite dishes on their roofs and driving new cars when I left in '04. If The One is elected come November, there's going to be a lot of disappointed people soon after.
Posted by MauserMedic at 9:49 PM