A Refreshing Reminder How Many Idiots Are Really Out There 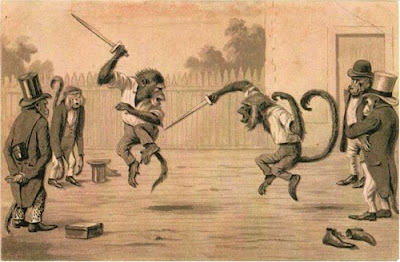 So, the Dow has dropped 700-some points, because wonder of wonders, throwing a huge wad of citizen's money hasn't fixed it. Perhaps the next step will be having Congress vote to withhold 75% of our paychecks in exchange for some high-quality government cheese to stimulate the economy? So looking over some of the comments and articles at MSN.com, I see at least one article suggesting we jail CEOs; another where Congress is grilling the same CEOs. That's rich. The people who voted for laws to loosen lending practices so people who aren't, in the main, smart enough and/or hardworking enough to build up a decent credit history are going to politically tar and feather the ones stuck with the laws. But the comments are better.

Entire paragraphs of writing ( I use the term loosely) in capital letters. Rampant spelling errors. Insulting nicknames, finger-pointing, and regurgitated campaign talking points. It makes me despair that people with the intelligence of a box of rocks are allowed to vote. I'm starting to long for the times when one had to be a property owner to even vote. At least it demonstrated that most of the voters where smart enough to manage that. Now anyone who can screech a sound bite and is eighteen years old or more can cast a vote for President of the nation that can pull the whole world into in economic crisis. There's a comfortable thought.

Even better, the article on the views of Egyptians regarding how we can get back in their good graces. I'm at a total loss there. I'm living here right now. I've been asked many times by Egyptians who I'm going to vote for. If you don't want to piss off every Egyptian around, DON'T SAY McCAIN, even if you explain you don't like him that much. It makes you a racist, anti-Islamic, war-monger. When you ask them why they like Obama so much, it's "because he's Muslim (yes, yes, we understand he says he's Christian; you gotta do what you gotta do, right?)" or "because he's African", or my favorite: "because he will stop helping Israel, and then they will collapse". That's it. Nothing about financial policy, nothing about human rights, nothing about about Iraq even. Just "Religion, Color, Religion". Gah.

And the comments again. Even worse than the previous article. The one-worlders and I'm-so-embarrassed-to-be-an-American crowd swarmed that one. We're citizens of the world; the President of the United States is really everybody's president, so we need to vote how the world wants us to; the world will respect and love us if we just elect Obama. These are the type of people who stayed in Europe when the first waves of immigration to the colonies occurred. The people who want to be taken care of, who look to others for their self-worth. Unfortunately, all it takes is a generation of easy living for these people to prosper again. And it's been a number of generations since thing were really hard in the US.

No wonder I can't stand being around large groups of people. It sucks the smart out of you.
Posted by MauserMedic at 12:34 PM